Giuviv Russian Film now has its own Facepage page. I'll be publishing more of the smaller comments and news items there so if you're interested please go on to Facebook and like the Page here: http://www.facebook.com/GiuVivRussianFilm
Posted by giuvivrussianfilm at 21:50 No comments:

The Start of the Summer Festival Season - Kinotavr in Sochi. 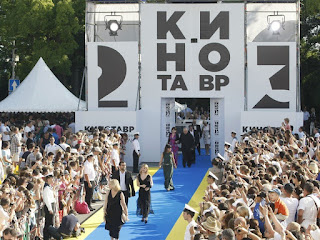 The main festival season in Russia has got underway with the first main film festival of the summer - Kinotavr - recently concluding in Sochi. In recent years it has made some innovative choices and a look back at the history of its prizes suggests that it gets things right some but not all of the time. This year the award of the main prize to Pavel Ruminov to his film Я буду рядом (I'll be by your side) has united all critics in their consternation at this average film - shot in reality in conjunction as a TV serial -being granted the main prize. The far more noteworthy new film by Sigarev (already noted in recent international film festivals such as Rotterdam and Wiesbaden - and written about here http://giuvivrussianfilm.blogspot.com/2012/05/vasily-sigarev.html) was given only the consolatory Directors' Prize. as well as that for the best camera work.

Other prizes went to the two actresses in Avdotia Smirnova's watchable but frankly superficial and cliche' ridden 'Kokoko'. The jury also completely failed to notice the innovative new work by Svetlana Baskova- a director who has worked in the field of Extreme Underground and has now branched out into a much more politically engaged direction. Her film - За Маркса... (For Marx...) produced by her husband the well-known radical artist-Anatoly Osmolovsky - developed quite a furore at the festival. Apart from returning to a hidden theme - the working class and independent trade unionism- rarely touched upon in post-Soviet times (the last film on the working class in post Soviet Russia could be said to be Vadim Abdrashitov's Магнитные бури (Magnetic Storms) which dealt with the subject in a kind of fantastic realist way) it tried to fulfill a number of aesthetic choices too. A Brechtian left formalism etrying to unite socialist realism with Deleuzian constructs may not appeal to many conventional viewers but it certainly sounds an innovative new direction and hopefully I'll be able to comment further on this director in the near future on this blog.

Other films in the film festival that probably deserved more of a hearing included the film by the Kuzbass born director Aleksei Mizgirev «Конвой» (Convoy). His earlier 2009 film Бубен, барабан (Buben, Baraban) showed some great promise and Convoy, produced by Pavel Lungin, has already debuted at the Berlin Film Festival. Mikhail Segal's comedy Рассказы (Tales) - a film-almanac of four separate stories- has been written about by Novaya Gazeta's Larisa Maliukova here www.novayagazeta.ru/arts/52986.html Pavel Kostomarov and Aleksander Rastorguev have continued their documentary project with a sequel to Я тебя люблю (I love you) named Я тебя не люблю (I don't love you). According to Maliukova this, along with Baskova's film, represented the most radical artistic experiment shown at the festival.

The next main festival here in Russia is the Moscow International Film Festival which I hope to comment on at length (if I'm granted accreditation) and then the Odessa Film Festival which is to take place two weeks later will most definitely be given my full attention here. A chance to watch some Ukrainian cinema as well as the new Renata Litvinova feature among others will mean that my blog will be a more regular affair over the next month. In the meantime here is the trailer of Baskova's film 'For Marx...'.


Posted by giuvivrussianfilm at 08:21 No comments:

At the end of May the Iluzion cinema decided to treat its viewers with a trio of films by one of the most interesting figures in Russian and Soviet cinema- Yakov Protazanov. Undoubtedly, one of the most prolific directors Russian cinema has ever had, his filmography runs to well over a hundred films (80 of which were produced by 1918) and so it is an almost impossible task to summarise such a career. In Soviet times (after a spell in France and Germany) he returned to direct 'Aelita' - one of the great Soviet science fiction films based on Alexei Tolstoy's novel of the same name. At Iluzion the three films on show were Закройщик из Торжка (The Tailor from Torzhok), Процёсс о трех миллионах (The Trial of the Three Millions) and the almost Bunuelian romp about religion Праздник святого Йоргена (Saint Jorgen's Day). These three, of course, represent only a minute serving of his talent but nevertheless indicate what an immense talent is often ignored by scholars of world cinema.

Protazanov, of course, had a difficult time among many of the Soviet critics and was always deemed the arch traditionalist amongst the Soviet avantgarde. This was the view propounded also in Nikolai Lebedev's history of Soviet Cinema which came out in 1947. Yet in many ways nothing could be further from the truth and now critics and scholars like, for example, Marianna Kireyeva, have been known to state that Protazanov represents a kind of super avant-garde. His ability to use a multiplicity of cinematic languages and forms and not to be tied down by any of these was, arguably, the true mark of Protazanov's claim to greatness.

Interestingly, this 'arch traditionalist' (according to the accepted definitions) of early Soviet cinema had played an enormous role in the formation of the French avant-garde- Rene Clair, an actor in one of Protazanov's French films 'The Meaning of Death', wrote about this influence. In fact, the early French avant-garde were in many ways formed by their experience in the Russian emigre Studios de l'Albatross.

Like his colleague at Mezhrabpom studios, Boris Barnet, a scholarly study of Protazanov is hampered by the fact that he never left written accounts of his own work. While an Eisenstein scholar may found it hard to ever read everything written by and about his object of study, a student of Protazanov faces the opposite problem of never quite knowing about how Protazanov himself conceived of his own work.

Nonetheless there were certainly dominant themes running through his oeuvre and the viewing of the trio of films at Iluzion certainly highlight his own fascination with religion and deceit. Whether Protazanov was a Tolstoyan at heart (as is suggested by his early works) or a de facto Bunuelian avant la lettre (as his Saint Jorgen's Day intimates) remains to be seen. He was, however, in retrospect one of the most fascinating figures of Russia's Silver Age to survive and even to flourish throughout the early Soviet period. His work with Meyerhold in Белый орёл (The White Eagle) as well as with Ilf and Petrov and Sigismund Krzhizhanovsky in Saint Jorgen's Day suggest a figure who was able to attract some of the most fascinating figures of Russian culture to his orbit. Other great films of his include Сорок первый (Forty First)- one of the greatest films to be made about the Russian Civil War as well as one of the best literary adaptations made during the Stalin period & whose power still survives to this day; Бесприданница (Without a Dowry) by Ostrovsky.


Posted by giuvivrussianfilm at 04:41 No comments: