Dmitry Mamulia - in search of the dead viewer.

A very small season of films at Zvezda cinema in Moscow of films by members of the Moscow School of New Cinema allowed me yesterday to watch two rarely shown films. In spite of the fact that these films were shown at one of the cinemas with the smallest capacity in the city, the cinematic significance of Dmitry Mamulia (whose films introduced the season of four film-makers) belies the difficulty with which his works have in finding an audience. Mamulia has set out on a path very different to both mainstream and arthouse directors in Russia and has brought some of the most original aspects of certain masters of European cinema into the forefront. It's hard not to think of the Dardenne brothers Rosetta constantly moving inside a labyrinth which defeats her when observing the hero of Другое небо (Another Sky). The experience of Bela Tarr is there, somewhere, too and, yet another film which Mamulia referred to in a Q&A session after the film was Visconti's Rocco e i suoi fratelli (Rocco and his Brothers). With the proviso that, of course, the drama of Visconti is impossible nowadays. Shooting a film whose subject matter touches upon the arrival of an immigrant to Moscow can only resemble the arrival of immigrants to Milan in the post-war economic boom by presenting that interminable labyrinth but without the slightest hint of pathos or emotion. Mamulia accomplishes this by excising all emotion on the face of the actor and even removing most traces of dialogue. The hero is surrounded by sounds but the tragedy of which he is at the centre of comes about off-screen.

Mamulia worked alongside Bakur Bakuradze on the first film shown yesterday evening Москва (Moscow). Mamulia and Bakuradze have been friends since their days together in Tbilisi and this rather unique document of their work together provides more than a clue as to their interest in capturing contemporary reality. A film that once again taking as its theme immigration manages to unite the harsh reality of the slave-like existence of Russia's gastarbeiters with a sense of the incredibly poetic imagery of interiors. Yet the reason for choosing the gastarbeiter as protagonist of his films can hardly be a purely social one. Mamulia is not a social realist and nor, in Another Sky, has he made a film like Svetlana Baskova's За Маркса (For Marx) with its Brechtian and Godardian didactics. Rather he has built a film without a script working on a rather simple precept. The arrival of father and son to Moscow, the search for an ex-wife and the off-screen tragedy which, in a way, determines (sacrifice or not?) the silent, unemotional reunion that we see at the end. Any script is almost superfluous because in a way it is reality sculpting in the details and here this ability of Mamulia's to experiment somewhere on the border between documentary and feature draws out his real strength as film-maker.

Yet for all this lack of emotion and drama, this lack of dialogue, the presence of the camera on the protagonists back of his head as he walks through this endless labyrinth of a city that, filmed by Alisher Khamidkhodzhaev, is captured in a way not altogether dispelling the poetic magic of Pasolini's periferie. Poetry and realism, in that very Pasolinian sense, are back on the agenda here. If as Mamulia once quipped in an interview, his ideal spectator is the dead viewer one can only envy them given the fruitful cocktail that he seems to be offering us. The seeds that Mamulia (and his fellow film-maker Bakuradze) are planting give one a reason to hope that cinema in Russia has not died the death decreed for it by the thousand idiocies foisted upon it by its government, its audiences and its own cinematic elites. But then, as usual, cinema in Russia was always rescued by its outsiders and those who it was only too willing to exclude.

Mamulia is presently in the process of working on two projects - one of which is to be filmed in India. As he mentioned yesterday in Zvezda he is working on a film based on the strange end of Herbert von Kleist.
Posted by giuvivrussianfilm at 14:32 No comments: 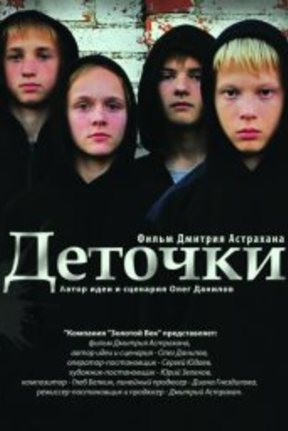 Dmitry Astrakhan is not a film director who gets much coverage outside of Russia even if he is an extremely prolific filmmaker. In many ways this is also because he is not the kind of director who receives much serious attention - his is no 'auteur' or art house cinema but neither is it the kind of blockbuster that has dominated the multiplexes and even got attention as representing the new 'Big Style' of the Putin era. The film scholar Julian Graffy is one of the very few academics to have written about this director - he rather aptly entitled his article Popular Cinema for a Time of Uncertainty, although this essay was published some time ago. Astrakhan's latest film Деточки (Kids) seems to fit particularly well into that description. In spite of the fact that this is popular cinema for a mass audience in Moscow, so far, it is being shown only at the Khudozhestvenniy cinema. Popular cinema in form and yet in content rather extreme. A band of orphans decide to avenge other child and young victims of violence and neglect- the perpetrators who range from paedophiles to indifferent and corrupt child medics, from drug dealers to army officers who subject their conscripts to hazing are, in most cases, killed or subjected to the punishment that they themselves deal out on their own victims.

In many ways the film recalls that old slogan Так Жить Нельзя (We can't go on living like this) from the perestroika period. The fact that the film has been called a сказка (fairy tale) doesn't seem to lessen the directly political and social reading that has been given the film. Indeed one of the few remaining opposition-minded parliamentarians Ilya Ponomaryev has himself spoken of the film in this vein. Others such as the Afisha correspondent seem certain that the film is doomed to become a national hit because of its rather scandalous nature. Scandalous, even though one giving hope in the form, as Maria Kuvshinova puts it, of knife-carrying youth. The obvious and ever-present comparison is with Govorukhin's 1999 revenge fantasy Ворошиловский стрелок (The Rifleman of the Voroshilov Regiment). Of course, Govorukhin has mainly turned his back on film and since become representative of that very hated system against which the new avengers seem to be intent on resisting. Yet apart from Govorukhin's film one can think of a whole set of films which one could relate this film to in some way or another. If the Afisha correspondent talks of Balabanov's Брат-2 (Brother-2), others such as the New Times journalist, Olga Galitskaya, refer to its similarities with the popular Soviet movie from 1966 Неуловимые мстители (The Elusive Avengers) by Edmond Keosayan.

There is, of course, also the verbal allusion with Ryazanov's most successful fighter for social justice, Yuri Detochkin, in his film Берегись Автомобиля (Beware of the Car) in which a car thief steals others cars which he knows have been acquired through corruption or Блат:

And yet, of course, this particular fairy tale by Astrakhan is of darker stuff and, in so far as it reflects a general social consciousness far better described than other directors are capable of, reflecting, as Evgenii Margolit  puts it, "mass consciousness with its hopes and phobias", it speaks of much more dangerous times. However, it could also be a film which, nonetheless, awakes a certain life into the spectator. A film that chimes with the times in the re-emergence of the child at the centre of political struggle (especially given the recent controversy over the 'Dima Yakovlev' law) or a film that speaks to a fundamental fear of the anarchy that adults are transferring to a younger generation. Whether its scandalous nature will have any particularly powerful effects and re-awaken a slumbering society or cater to a general sense of the need for society to avenge its presumed (or actual) tormenters remains to be seem. Whether it really is a call to subvert a passive and general indifference only time will tell. Astrakhan's particular and rather unique style of popular 'trash' cinema surely will be of greater interest to the cultural sociologist or the sociological historian of years to come than to the student of cinema aesthetics. Astrakhan, however, is an interesting and rather singular (if not necessarily artistically significant) barometer.