Naum Kleiman's Talk at the Meyerhold Museum on Ivan the Terrible 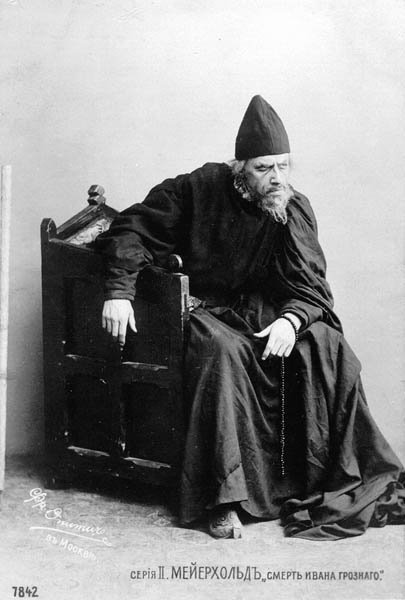 One of my favourite places in Moscow is the Meyerhold Museum. It's rather rare to feel at home in the houses of famous writers and artists but for some reason Russia is an exception. Chekhov's houses in Taganrog and Yalta, Tolstoy's estate in Yasnaya Polyana and the Mayakovsky and Meyerhold museums here in Moscow are places which I would happily revisit.

Returning to Moscow last week I realized that I will come to visit the Meyerhold Museum regularly this time. A series of lectures on Meyerhold's actors and film showings with introductory lectures are each held once a month. To my great regret I have missed those lectures held earlier in the year on Lev Sverdlin and the film 'By the Bluest of Seas' by Evgeny Margolit and other lectures by cinema scholars such as Andrey Shemiakin and Irina Grashchenkova (who, however, will return for another lecture next month on the film A Severe Young Man by Abraam Room) but yesterdays lecture on Eisenstein's 'Ivan the Terrible' by Naum Kleiman was so brilliant that I forgot what I had missed and just savoured the opportunity to hear the world's foremost Eisenstein scholar captivate the audience with a talk so wide-ranging that even Podmoscovia's lakes of melted snow, oil and dirt that greeted me on my walk home couldn't dim my spirits.

It is almost impossible to summarise a lecture by Naum Kleiman. It ranged from the importance of the frescoes, the quotes of Michelangelo's Sistine Chapel in the Eisenstein film, the difficulties of those actors who were trained by Stanislavsky had in playing in this film shot by Meyerhold's star pupil, the terrible curse that Ivan the Terrible would have on those who tried to turn the story into art (Kleiman suggested that Eisenstein knew that making Ivan the Terrible would become a fateful decision in his life), Eisenstein's use of colour, the siginificance of the gestures and the fact that this film was in many ways Eisenstein's homage to Meyerhold. Eisenstein never forgot his debt to Meyerhold - it was Meyerhold's archive that he took to Alma Ata for safekeeping during the war. Also, everywhere he went he would take a photograph of Meyerhold with him even though he would certainly be arrested had the authorities found about about this. Kleiman argued that Part Three of Ivan the Terrible could have lead to Eisenstein's arrest and possible execution given his determination to portray Ivan the Terrible (and hence Stalin) as a Lucifer-type figure. Unfortunately that which remains of Part Three is a very small segment. The culprit who destroyed those sequences of the third part of Ivan the Terrible is Ivan Pyriev who decided that Eisenstein had shot Ivan the Terrible 'incorrectly' and that Pyriev himself would show the real Ivan the Terrible to the world. (A crime against cinema similar to those of our contemporary, Mikhalkov?)

Kleiman is a scholar who inspires a fresh love for Soviet cinema and a realization that it is part of the universal history of cinema and art. The references in Ivan the Terrible to Michelangelo, the Japanese Kabuki theatre, to the opera Rigoletto show what a universal artist Eisenstein really was (as was his master Meyerhold). When he introduced the talk, Kleiman reminded the audience of a photograph of Eisenstein shot on the day of Meyerhold's murder (February 2nd 1940). Eisenstein in the photograph wears an expression of absolute gloom on his face as though he somehow had some intuition that this was the day in which his beloved master Meyerhold was to be cruelly executed. It is an irony of sorts that the only section that remains of Ivan the Terrible Part Three is a scene in which a German is being interrogated by a crazed Ivan the Terrible and his oprichniky. A scene which obliquely alludes to the Stalinist camps where one of the greatest theatre directors the world has ever known lost his life.

The photograph accompanying this article is one of Meyerhold playing Ivan the Terrible.
Posted by giuvivrussianfilm at 04:54