Schism in the Cinematographers' Union? 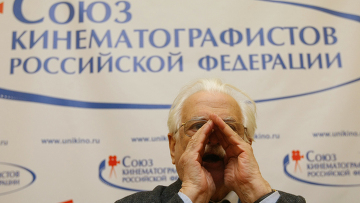 The spectacle of the Kremlin showing of the sequel to Mikhlakov's 'Burnt by the Sun' has been dampened by the exit of Russia's most brilliant group of directors, critics and scholars from the organisation that Mikhalkov has reduced to his private fiefdom in the past decade and more (the Cinematographers' Union). In recent weeks a collective letter signed by directors and film critics and scholars such as Eldar Riazanov, Alexei German Senior and Junior, Vladimir Dostal, Vitaly Mansky, Boris Khlebnikov, Andrey Proshkin, Andrey Smirnov, Naum Kleiman, Pavel and Gary Bardin, Daniil Dondurey, Victor Matizen, Otar Ioseliani and many others have finally brought to a head (yet again) the conflict in the Russian film world. Mikhalkov's dictatorial style and his immense ego have had disastrous consequences for the Russian film world. The loss of the excellent Museum of Cinema in the early part of this decade was perhaps the most grave blow and the possible demise of Dom Kino would be another body blow to any who want to preserve the memory of twentieth century Soviet cinema. The details of the conflict are long and rather tedious to go into but some of the effects have been truly shameful. The disgusting treatment of Marlen Khutsiev (in the photo) and the farce of the Mikhalkov-staged 'congress of revanchists' in February last year at the Gostinny Dvor had unpleasant echoes of post-war Zhdanovschina. Mikhlakov's suggestions that his opponents were part of some 'Atlantic' plot was absurd but his recent interview with the fawning Elena Yampolskaya in Izvestia really managed to plumb new depths. The two 'national patriots' managed to work each other up into a spiral of of spleen and fury against the opponents of Nikita Sergeyevich. The mention of Ioseliani's signature drove Mikhalkov into a denunciation of the Gerorgian filmmaker living in France as a russophobe and then Yampolskaya suggested that the whole band of opponents were a group of anti-Russian filmmakers. Suggesting that Riazanov, the Germans, Smirnov et al are all russophobes gives one an indication of how bitter this schism is and yet also to what absurd lengths Mikhalkov will go in battling his opponents.

The pomp of the Kremlin showing of the sequel to 'Burnt by the Sun' is, of course, the main news in the press but it is unlikely that Mikhalkov can gain any respect from the world film community when denouncing the greatest directors of contemporary Russian film as campaigning against Russia. Russian cinema without the Germans, Dostal, Proshkin, Riazanov, Abdrashitov, Khutsiev, Danelia, Smirnov, Sokurov, Bardin, Mansky would be the kind of cinema produced in the last fourties and early fifties (the time of the so-called film famine). This would be the face of Mikhalkov's call for a return to the 'high style'. It is a sign of hope, however, that his opponents are moving and organising collectively.
Posted by giuvivrussianfilm at 08:30