Evgeny Chervyakov and the rediscovery of his masterpiece Мой сын (My Son, 1928) 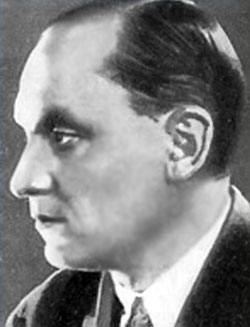 While most film buffs know of the extraordinary rediscovery of extra reels of Fritz Lang’s Metropolis in Buenos Aires’s Cinema Museum in 2008 another rediscovery by Fernando Martín Peña of the same year at the same location has gone relatively unreported. Yet this rediscovery has been justifiably called by Russian film scholar Pyotr Bagrov “the biggest archival find in the history of Russian film for the last fifty years” and comparing its significance with the time when the second part of Eisenstein’s Ivan Grozny was finally released in 1958. In 2008 five reels of a 16mm copy of Evgenii Chervyakov’s Мой сын (My Son, 1928) was discovered with an attributed title El Hijo del otro (Another’s Son).  This discovery has led film scholars like Pyotr Bagrov to claim that this rediscovery in many ways rewrites the history of early Soviet cinema. The loss of Cherviakov’s films from the 1920s meant that he was considered as a rather insignificant figure in Soviet cinema and rarely written about. Bagrov goes as far as saying that one almost regrets that his later films remained as they give an altogether false view of the great stature of this filmmaker. The films of the late 1930s which have been preserved were, sadly, propaganda films about wreckers, collective farms and, in the case of his Заключённые (Prisoners, 1936) a film about the ‘moral regeneration’ of Gulag internees based on Pogodin’s book Aristocrats. While it may have some slight cinematographic interest (for example, it was the first film in which the great actor Mark Bernes was to play a role) none of these later films can be said to give Chervyakov any significant role in Soviet cinematic history. Bagrov was to state that Cherkyakov was to work under a state of severe depression in this period and it seems it would be most unfair to portray Chervyakov’s place according to these extant films.

That is why the loss of his 1920 films were such a tragic affair. The statements from his contemporaries prove that he was one of the true giants of 1920s Soviet cinema. He was to work as much as an actor in the early years and was, for example, to play Pushkin in Vladimir Gardin’s Поэт и царь (Poet and Tsar, 1927) as well as a soldier of the National Guard in Kozintsev and Trauberg’s classic film on the Paris Commune Новый Вавилон (New Babylon, 1929). Yet it was his reputation as director that truly impressed his contemporaries. Contemporaries like Sergei Yutkevich, Mikhail Bleiman and Leonid Trauberg. Perhaps the most significant comment was by the great Aleksander Dovzhenko. Dovzhenko exceedingly rarely praised any other film director and was never known to have admit of any influence by any other director. With the sole exception that is of Evgenii Chervyakov. Dovzhenko’s words, therefore, that “Этот человек может сделать много хорошего. Он первый создал у нас лирический жанр, и я многое у него воспринял” ( [Chervyakov] is able to do great things. It was he who first created the lyrical genre in our cinematography and I learned a lot from him) signify high praise indeed from Dovzhenko. Indeed, Chervyakov seems to have been a major influence according to Bagrov in his work with the close up. Bagrov goes on to speculate as to how it may have influenced Pudovkin’s experimental work Простой случай (A Simple Case, 1931) and the idea of the ‘emotional scenario’ that was to become significant in the early 1930s.
Apart from this major influence on Dovzhenko (arguably the only real influence on Dovzhenko given how individual a director Dovzhenko was), Chervyakov could be said to play an absolutely unique role in the Soviet twenties- his was a style that strayed from the montage, fast cutting techniques of others (the Eisenstein, Kuleshov, Vertov etc) but was also unlike those who didn’t make montage their god. Bagrov contrasts Chervyakov with those directors, like Abram Room or Boris Barnet, who were interested in contemporary social morals, manners, mores rendered by the Russian word быт. As contemporaries remarked, Chervyakov’s films had nothing that showed that they took place in the Soviet Union. They could as easily been a film about any other society (something which is clearly not true of, say, Room’s Третья Мещанская -better known in English as Bed and Sofa, 1927). Bagrov looking for films which could have influenced Chervyakov casts his glance away from early German cinema to that of French cinema and sees only one film that seems to have played a major role in influencing him- that of Jean Epstein’s 1923 drama Cœur fidèle (or Faithful Heart). As for contemporary comparisons of Chervyakov’s rediscovered film, Bagrov suggests that there are immense similarities with Dreyer’s La Passion de Jean D’Arc (The Passion of Joan of Arc) as to how they build their dramaturgy with the close up and it is curious that these two films were shot almost simultaneously. Another name that Bagrov uses in conjunction with Chervyakov is that of Dmitry Kirsanov, one of the most fascinating émigré filmmakers most well-known for his avant-garde film made in France Ménilmontant (1926).

Even in the 1920s Soviet commentators were stating (often while severely criticising him) how Chervyakov was ahead (rather than behind) his time and it is something that seems to have been borne out. Bagrov suggests that Chervyakov’s work can be said to have been the first sign of existential cinema and points to the many scenes where the director highlights a lack of communication between the protagonists. For example, in the film a long conversation may be rendered by a two word intertitle as though specifically to highlight that however much the characters talk little is actually being communicated. This existential cinema was to be much later (three to four decades later in fact) championed by the likes of Antonioni and Resnais as well arguably, in Soviet cinema, by Marlen Khutsiev. Another witness to the significance of Chervyakov as director was the actress Anna Sten who had played in Barnet’s comedy Девушка с Коробкой (Girl with a Hatbox, 1926) and went to act in the films of such directors as King Vidor, Raoul Walsh and Rouben Mamoulian who stated that Chervyakov was probably the greatest director she had ever worked for.

It can only be hoped that soon Chervyakov’s rediscovered masterpiece will one day soon be available to more wide audiences than the odd screening at film festivals and retrospectives. One can only mourn the louder for those other films made by him in the 1920s that seem to have been forever irretrievable. One must not forget either the work of his cameraman Svatoslav Belyaev who worked with him on this and on his other lost 1920s films and whose reputation should be compared with that of the great Andrey Moskvin. Both Chervyakov and Belyaev would die in the fighting for defence of their city, Leningrad in the same year, 1942.
Posted by giuvivrussianfilm at 04:26