Historically Russian (or Soviet) documentary has often been at the vanguard of worldwide trends and it is not for nothing that two of the most powerful figures in the renaissance of French cinema in the 1960s - Jean Luc Godard and Chris Marker - would set up their Vertov and Medvedkin groups. Vertov's documentary output continues to be outstandingly fresh viewed even in the light of today. For all the revisionism present during the late 1980s and 1990s attempting to consign Soviet cinema to the historical dustbin, the lessons that Vertov has to offer have still not been fully learned even today. Jeremy Hicks in a recent book on Vertov Dziga Vertov: Defining Documentary Film  has shown how the lessons of Vertov have never really been fully assimilated even by those who championed him. Hicks concludes that Vertov's approach is even more relevant in today's new digital age than ever before:-

Digital mastery seems to herald a new scepticism towards documentary as an objective register, further weakening the Griersonian realist tradition. Vertov's explicitly partisan exhortation, as well as his scepticism towards the image and recording process, echo central themes of the digital age. (some also argue) that his search for non-narrative solutions to the organisation of material anticipates those of the database.

The fact that few, up until some years back, were ever acquainted with much more than his Man with a Movie Camera only showed how limited people's understanding of the true Vertovian contribution really was.

Yet if Vertov was the giant to which nearly all monographs and studies in the field of Russian documentary have centred around, the Soviet documentary world was a far, far more interesting world than most give it credit for. Medvedkin, of course, also changed documentary film history with the extraordinary story of the Кино-поезд (The Film Train) experiment. Chris Marker was the great rediscoverer of this fascinating story in the West but it is also recounted by Emma Widdis in her book on Medvedkin. Widdis tries to get at the essence of the experiment while discussing Nikolai Izvolov's description of the significance of the Medvedkin experience:

According to Izvolov, [the film-train team] was the first to realise that the screen is not a mirror, but a transformer of life'. It would seem more appropriate, however, to suggest that Medvedkin's team were remarkable for their exploitation and expansion of the potential of the screen precisely as a mirror- reflecting to the spectator his or her own life, in all its unsavoury reality... The film-train productions represented communities to themselves granting the local space the symbolic weight of representation... To see oneself captured within this magic mirror must have been both exciting and disturbing, a process of de-familiarisation that would enable a new kind of awareness of both self and community. ... A deep-rooted belief in the ideological weight of participation underlay the philosophy of the film-train.
Widdis notes how the local community were involved in the actual production process of the film-making. As well as Vertov and Medvedkin, another fascinating development in Soviet documentary bore the name of Esfir (or Esther) Shub. Shub began her career editing foreign films at Goskino. Her compilation film Fall of the Romanov Dynasty as well as later films were made through

searching, finding, "opening" historical film-documents - but not in film libraries or archives ... (but) in the deep cellars of Goskino, in "Kino Moskva", in the Museum of the Revolution lay boxes of negatives and random prints and no-one knew how they had got there.

Jay Leyda goes on to state in his celebrated history of Soviet cinema 'Kino' that:

More sensitively than Vertov and more carefully than any newsreel editor in the world, Esther Shub examined the whole archive of preserved newsreels, frame by frame, finding the implications and connectives in each shot that only a skilful editor is trained to do. Trained primarily in the editing of 200 foreign fictional films and ten Russian films, Shub gave the newsreel a new dimension when ... she brought back to life, footage that had hitherto been regarded as having, at the most, only the nature of historical fragments. By the juxtapostion of these 'bits of reality', she was able to achieve effects of irony, absurdity, pathos and grandeur that few of the bits had intrinsically.


Often histories of Soviet documentary film will tend to ignore the many other names and films that were so significant. Victor Turin's Turksib from 1929 may be mentioned and a recent BFI DVD and Blu-Ray copy have finally given this film the critical significance it deserves in showing its influence on British documentary filmmakers in later years.

The number of great documentaries made by those who would (or had already) become great feature filmmakers is also significant. Those who have seen Kalatozov's 1930 film Salt for Svanetia will soon dismiss suggestions that the true genius behind his later Thaw classics from The Cranes are Flying onwards was Urusevsky (even though Urusevsky was undoubtedly a Picasso of the camera). Kalatozov himself started off as a cinematographer. This film with a script by the Ego-Futurist, Constructivist and Brecht translator Sergey Tretyakov is one of the films that most amazed me in my early days of watching Soviet cinema. I was overjoyed to read Jay Leyda's account of this film which coincided with my own first impression of it as a Soviet Los Hurdes. Leyda comments:

The film that will always be identified with (the Svanetians) as los Hurdes in Spain are identified with Bun'uel's Land Without Bread, is Kalatozov's Salt for Svanetia. The two films are always linked in my mind - they are both sur-realist in the literal sense of the term.

Like Bunuel's film it was also bitterly attacked by members of the community it depicted and for many of the very same reasons.

Roman Karmen is, for many, the archetypal villain of thee Soviet Socialist Realist documentary. And the disgust is palpable in a long essay by the Russian film critic and scholar Alexander Deriabin on documentary ethics:-

Karmen was, first and foremost, the first genius of self-publicity in Soviet cinema never missing an opportunity to point out that only he was able to shoot this or that ... Later ... Karmen became the monopolistic possessor of unprecedented administrative resources ... to travel to all the hot spots of the world in order to film what other Soviet documentary filmmakers could neither see nor shoot ... In this respect, Karmen more closely resembles Leni Riefenstahl than the unfortunate Vertov, who was accused from all sides during the first years of perestroika of being an "accomplice of the regime" and the embodiment of a totalitarian filmmaker. 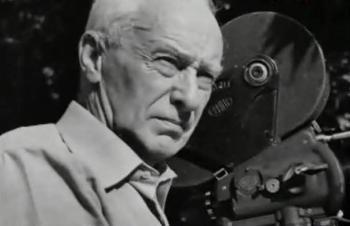 Nonetheless, Karmen was an influential filmmaker far outside the bounds of the Soviet Union and still remains one of the great war documentarists whose name still remains in the history of world documentary.

The very fact that during the war years one in four cameramen perished gives an indication of their vicinity to the heat of events and the newsreel was suddenly to acquire fundamental significance. 'The defeat of the German Armies Near Moscow' was to be the most widely shown film of the war (renamed elsewhere Moscow Strikes Back).

Also the truly astonishing war documentaries by Alexander Dovzhenko set in the Ukraine would also remain significant classics. For the scholar Peter Kenez, Dovzhenko's 1943 documentary Battle for our Soviet Ukraine has

Dovzhenko's highly individual style, characterised by lyricism and attention to the beauties of the Ukrainian landscape... He was among the first to utilize captured German newsreels in order to make his points.

The films by Dovzhenko went beyond documentary in many ways. A critic from Izvestia at the time called it a "modern man's chronicle of events and a heroic song" while another critic suggested that the frames not only illustrated the text, but also melded with it to produce a single artistic whole.