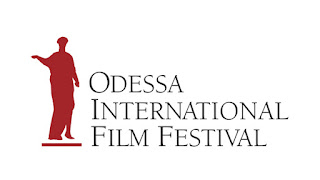 The fourth Odessa International Film festival is underway- already into its fourth day- and appears to have kept the format that it had in previous years. Though a little smaller and, it seems, like well-financed this year than in previous years. One or two big stars- Kusturica in particular have come- and the attempt to retain the 'glamorous' side of the festival has remained. There are still some joys for the film enthusiast who isn't too keen on either the glamour aspect or the film industry aspect of the festival.

Yesterday, for example, Ulrich Seidl gave a master class on his Paradise trilogy and today will be Jiri Menzel's turn. Roger Corman and Jos Stelling will also be visiting. The Seidl event yesterday was a fine introduction to his working methods but it is a pity that not all the questions from the floor were from genuine film enthusiasts. Last year's master classes by Peter Greenaway and Sergei Loznitsa went much further in developing an idea of all sides to cinematic practice or ideas of the directors. Unfortunately, one member of the audience took the master class as a press conference (and an odd one at that) and started to ask Seidl about the moral decline of Europe demonstrated by its gay marriages and drug problems!!! Alas, the 'moral brigade' at film festivals in Russia and the Ukraine is starting to become a real plague. At last year's press conference one member of the press started to hysterically attack the director and cast of the Serbian film Parade launching into a vile homophobic rant. Tomorrow's press conference of Mike Lerner and Maxim Pozdorovkin for the film Pussy Riot: A Punk Prayer is unlikely to go very smoothly either.

Odessa, while having far fewer films than the Moscow Film Festival, often overlaps in terms of the type of programme. So its competition programme might have, at times, the same film as the Moscow competition (this is the case this year with Wojtech Smarzowski's Traffic Department). By all accounts last year's Ukrainian competition was said to be less than good although this year's hopefully will be noticeably better.

A full retrospective of Paradjanov as well as films about Paradjanov and the opening of an exhibition of Paradjanov's collages is also another 'Ukrainian' feature to the festival. A Michael Winterbottom retrospective is yet another British component to the festival (Odessa had already shown its affection for British film with the Monty Python retrospective two years ago). Unfortunately, the lecture given by Mark Cousins was one of the cancelled events - although his film A Story of Children and Film is showing.

Kira Muratova, the Odessa director absurdly overlooked by previous festivals, will be here to present her film Вечное Возвращение (Eternal Homecoming). Though the fact that Muratova could not even get her previous film to be shown at the first Odessan International Film Festival casts an enormous shadow over some of the choices made by the selectors at that time. That this festival still hasn't deemed to show a full Muratova retrospective in the first four years is, also, rather strange. Given that the film scholar Ian Christie has called Kira Muratova the greatest woman film director in the world today, the only marginal appearance of her films in festival events in the past four years speaks ill of the festival's pretension to promote the cinematic excellence of its own city.