This article was originally published for the Calvert Journal on April 30, 2013
.
A film critic turned director may have been a common feature in the 1960s French New Wave but in contemporary Russia the case of Liubov Arkus is somewhat unique. One of Russia’s most established critics for the leading film journal Séance, Arkus has managed to create a new form of social documentary in Anton’s Right Here and by doing so she brings Dziga Vertov’s vision of the camera as an instrument of liberation one step closer to realization. Arkus explained that she made the film not thinking about it as a documentary and related to the protagonists not as documentary subjects but “as people who were close to me”. Arkus met Anton Kharitonov, a young autistic boy, after reading his text People- part of a compilation of writings by autistic children that she discovered when editing a copy of Séance. Anton and his family were to become close friends of the whole Séance collective. The film would arise more out of chance and necessity than design taking over four years to complete.

Arkus makes no attempt to whitewash the harsh reality for Anton and other autistic children in Russia in the film and her narration of Anton’s Dantesque trip through the hell of institutions all too ready to abandon the weak and vulnerable is as powerful an indictment as there could conceivably be.  In a scene where Anton’s choices become so bleak Arkus is constrained to abduct Anton from one institution thus precariously stepping beyond the boundaries which documentarists normally permit themselves.  Her film, though, is not dominated by this sense of bleakness and indignation and avoids pointing moralistic fingers at anyone in particular. The transformation of his father’s attitude towards Anton inspired by his viewing of footage from this film is a masterly scene in which the film reflects on the cameras powers to transform reality. Arkus also intervenes in the film with her personal tale of suffering abandonment as child of a victim of repression and transforming once again the relations between documentarist and subject once more steps into precarious territory. However, in this way Anton’s condition becomes shared and universalized bringing us back to that central and unresolved theme of 1960s cinema – the theme of communicability present in films of auteur filmmakers such as Antonioni, Herzog and the Soviet filmmaker Khutsiev. 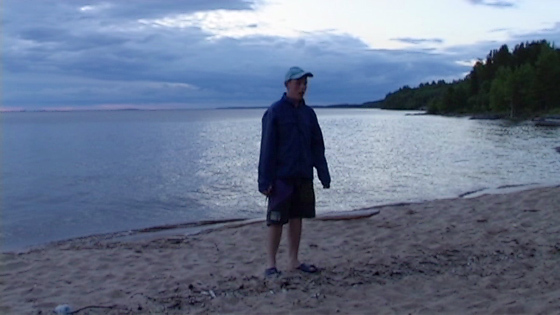 This film, however, does not take the rather well-worn route of the old-style social documentary in which the director observes and retells the life of the protagonist in order simply to generate either indignation or pity. Indeed such a subject matter confronts the documentary film-maker with a highly significant ethical dilemma. Sergei Dvortsevoy, one of the great documentary film-makers of the early 1990s, would eventually move into feature films because, in his words, “the worse it is for the subject of the documentary, the better it is for the film maker”. Arkus, however, resolved this dilemma and directed a film confounding many of the accepted rules of documentary film making.
It was one of Russia’s most innovative documentary helmers, Alexander Rastorguev, who helped Arkus understand the necessity of playing by different rules. In 2008 Arkus published Rastorguev’s “Natural Cinema” manifesto in Séance. Here he claimed that documentary cinema had died and could only regain meaning when film became what he called “ontological action”, “reaching the core of suffering  transforming life”.  The ideas in Rastorguev’s manifesto “impressed me enormously” Arkus told me in an interview in early January. Two other people were instrumental in helping Arkus realize this vision of “natural cinema”:- one was the cameraman, Alisher Khamidkhodzhaev, and the other was Anton himself who, in the words of film scholar Yuri Tsivian, had almost become Arkus’s co-director (an opinion that Arkus shared).

Arkus explained how it was Alisher who took on the role of the helmer at the start of the shooting process while she was “learning from him”, given that it was her first film. At the beginning she “didn’t even look into the viewfinder”, but by the final two shooting periods she was firmly in the director’s seat.  For Arkus, Alisher had the ability to portray “the very core of the human being rather than simply the human face or profile”- an ability which, Khamidkhodzhaev states, was influenced by the cinema of Sokurov and Pasolini. Arkus explained the unique role of Anton in the film-making process: “it was very much his relationship to the world and to others- to his mother and me – and his strength which defined the film and powerfully drove the plot of the film forward. One should not forget either his very strong charisma as well as his (what Arkus calls) ‘cinegenia’”. His refusal to accept less than genuine love from those around him be they his father or the carers in the, albeit very liberal and westernised, Svetlana institution, surely manifest his extraordinary willpower.

The protagonists, Arkus explained “became documentary subjects only at the editing stage when after shooting an immense amount of material it was necessary to develop a clear plot for the film”. The most difficult stage of the film, for Arkus, was the editing process. Five hundred hours of material had been shot and although it was shot in an ‘observational’ style, it was edited like a novel (according to her “a novel written before the modernist period and in the post-modernist vein”). This divergence between the shooting process and the composition of the storyline comprised the greatest difficulty for her. “Numerous options were made before I came to the difficult decision to tell the story in the first person”.  In many ways, too, the camera had become Anton’s substitute for the pen with which he could write a new text about himself. The last scene where Anton is given the camera to shoot the final shot makes this explicit.

This film has something very rare and powerful to say by tying autism and cinema together as equally being wrapped up in a struggle to communicate the incommunicable. This film has transformed social documentary as a genre here with the aesthetic and the ethical working symbiotically, bringing into question clear distinctions between the observed and observer, the director and protagonist while the camera loses its cold distance becoming an instrument for profound reflection, communication and even liberation. Anton’s Right Here may not be a film that vaunts its formal experimentation in the way that some of the films of Kossakovsky (one of Russia’s most extraordinary documentarists) do but it does manage to display new territories of human nature hitherto only partially revealed.
Posted by giuvivrussianfilm at 03:40