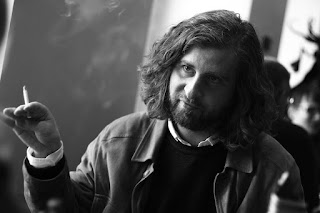 If most of the attention on Russian film this year is focused on Zviagintsev's 'Elena' and Sokurov's 'Faust' this year another film deserves a certain recognition. A recognition that it clearly hasn't seemed to get even in Russia. This week Nikolai Khomeriki's black and white film Сердца-бумеранг (Heart's Boomerang) has been released and yet it is showing at only one cinema in the whole of Moscow - the Pioner - on Kutuzovsky Prospekt. A great shame as there is a lot to be said in defence of this film even though few commentaries- even among professional critics whether in the Russian film journal 'Seance' or in the recent article by Mihaela Mihailova for the site Kinokultura  http://www.kinokultura.com/2012/35r-bumerang.shtml have really shown any real enthusiasm. And yet Khomeriki is starting to look like one of the few really original voices to have emerged from the New Wave that has emerged in fits and starts since 2003 and the Zviagintsev/Koktebel revelations of that year.

As Elena Gracheva argued in her article Bместо катарсиса ('Instead of Catharsis') in the Seance magazine, Nikolai Khomeriki has managed to use a perfect plot for melodrama and turned it fully against itself. That the predicament of learning that one can be victim to sudden death can be cathartic is done away with in this film. The knowledge for the protagonist is not a turning point and only seems to deepen his catatonic acceptance of a life lived with reticence and apathy. It is this truth which shatters preconceptions that have been held far too long and which makes the film so radical. (In this way it resonates with Zviagintsev's 'Elena' and the protagonists similar lack of a noticeable reaction to her own act of murder). There are other parallels with Zviagintsev (this time with the film 'Banishment') in the deliberate refusal to locate the action and furthermore in stirring up the confusion by filming in two contradictory locations - in 'Heart's Boomerang' the St Petersburg underground is filmed with Moscow external scenes.

What Khomeriki brings to Russian film is a new sensitivity that is not necessarily purely Russian. His work with Leos Carrax and Philippe Garrel and his studying at French as well as Russian film schools (in Russia he studied under Khotinenko but was also taught by Alexei German and Vladimir Menshov) has meant that there are certain aspects of Khomeriki's work which are rather unique to Russian film. He himself has spoken about how few Russian directors have given their full attention to filming female characters (and his previous film сказка про темноту 'A tale about darkness' was notable in the attention paid to bringing about a new angle to the cinematic image of woman in Russian film). He has reached a point in 'Heart's Boomerang' where these two cinematic cultures have managed to merge successfully and where their negative aspects are excised. The Russian film critic  Roman Volobuyev succintly spoke of how their is a contrast between the European phonetics and syntax of the film (Garelist mis-en-scenes and elipses) and a deeply Russian semantics- with all of Khomeriki films exploring the world of тоска́.

The film recalls a number of films of the Thaw - whether it be Ioseliani's Жил певчий дрозд (There lived a song-thrush) or the early films of Muratova but Plakhov also mentions Agnes Varda's 'Cleo from five to seven' as being as the source of inspiration for the film. The unrelenting but rhytmical beauty of the sequences in which the protagonists travels trance-like into the tunnels of the metro also recollect something of Ermanno Olmi's rhythmical exploration of lifeless routine in his films 'Il posto' and 'Lunga vita alla signora' as well as the laconic protagonist of Свободное плавание (Free Floating).

This is a film which will surely gain a greater reputation in time and people will surely soon wonder at the lack of an adequate inital response to this truly world-class film by a truly original voice in Russian and European cinema.
.
The emphasis on confinement and isolation is achieved thanks also to the superb cinematography of Shandor Berkeshi who has managed to perfectly capture the visual reality of "a world where freedom is no longer an option" (Mihailova in Kino Kultura). Berkeshi also shot 'Roads to Koktebel'' that first venture into the new Russian cinematic wave that Khomeriki belongs to.