In a Moscow which seems determined to wipe cinematic memory from itself - after the closure of Musei Kino in 2005, it is uncertain what exactly has happened to the Iluzion cinema (ремонт? - but then why so soon after it had been repaired a few years ago). Dom Khanzhankova has been turned into a restaurant. So it is now clear that the only place where one can see old Soviet films are in those few places which will show them on DVD in not very excellent conditions. The only reason one should go along to see these are often for the talks that accompany them. This Saturday there was an excellent talk in a small bookstore near Chistye Prudi named Читалка and a showing of the newly restored copy by the Toulouse and Bologna Cinemateques (alas yes on DVD) of Yuri Zhelyabuzhsky's film Папоросница от Моссельпрома (The Cigarette Girl from Mosselprom, 1924).

Apart from this being one of the most enjoyable comedies of the Soviet silent era this film is a delight in many ways and, apart from telling us much about cinematic developments in the early 1920s equally allows us to retrace and recapture a lot of the lost Moscow that was later demolished in the Stalinist period and beyond. And it was this aspect which really shone in the talk given. Tens of cadres from the film were shown as images of places no longer there or transformed beyond recognition. For a cinephile perhaps the most fascinating shots were those of the Mezhrabpom-Rus studios shot both from the outside and the inside. Here is a still of the American businessman McBride driving past the studio in the film based near Верхняя Масловская (Verkhnyaya Maslovskaya Street): The whole film, in fact, helps one to reconstruct a view of 1920s Moscow. This has been done in the excellent post in the Russian Progulkino blog here . The film itself was one of a number of Soviet films which were ordered as pure advertising - in this case for the Moscow state concern uniting various food suppliers and distributors. Others included Protazanov's Закройщик из Торжка (The Tailor from Torzhok, 1925) and Barnet's Девушка с Коробкой (The Girl with the Hat, 1927) which were both advertising films for the state lottery. The mystery of how advertising could produce such excellent films is, perhaps, an indication of the strange times of the Soviet 1920s.

That Soviet advertising could employ no less a pen than that of Vladimir Mayakovsky and the art work of Aleksander Rodchenko means that it is a world well worth exploring. It was to be Mayakovsky's pen that coined the most famous advertising slogan for Mosselprom Нигде кроме, как в Моссельпроме (Nowhere else but in Mosselprom) and he would work for Mosselprom coining a whole host of advertising slogans from 1923-1925- they are available in Russian here

Rodchenko would work alongside Maykovsky in designing some of the advertising posters for Mosselprom such as this one hear which carries Mayakovsky's famous advertising slogan: 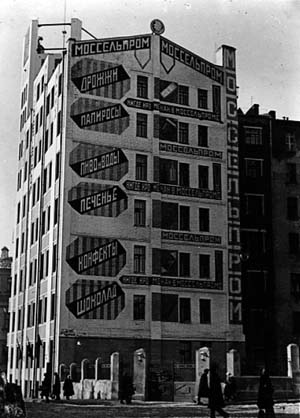 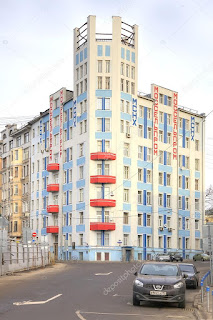 Nearby was located the great Proletkult theatre located in the building known as the Osobniak Mamontova. Here is a still from the film passing by the Proletkult building and then a photo of how the building looks today 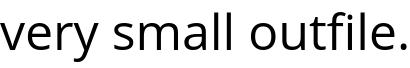 The youtube video of the film at the top is, unfortunately, not the fully restored version but a shorter version available previously.

Here is Rodchenko's photograph of an actual cigarette girl in Staraya Ploshchad: 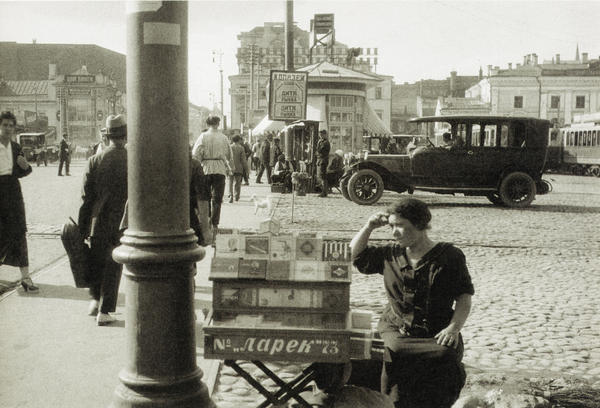