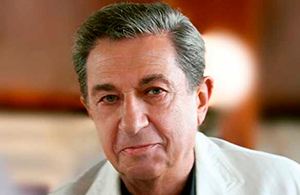 One of the founding members of the Современник (Sovremennik) theatre, Igor Kvasha was one of the symbols of a generation of actors who played a significant role not only in theatre but also in cinema as well as being in many ways the conscience of the shestidesiatniki (the sixties generation). Kvasha was one of the most active in terms of his willingness to stick his head out in terms of politically difficult subjects. As Lia Akhedzhakova notes in an interview with Novaya Gazeta Akhedzhakova on Kvasha, Kvasha was the first to sign letters in defence of jailed Soviet dissidents such as Sinyavsky and Daniel and at one point was refused exit after he had embraced the exiled writer Viktor Nekrasov in Paris and spent some hours in his company (word soon got round to the security services). Kvasha was also one of the hundred cultural and intellectual figures who recently signed a petition to release Pussy Riot. His civil engagement was clear, too, in his call last December of support for mass demonstrations against the political system Kvasha on Sakhraov demo

His acting career was synonymous with the Современник theatre where he remained from its foundation until his final days - the theatre being one of those symbolic spaces in the Soviet Union where one could find views that challenged the dominant view of things and the dominant ideology. In film he played in over 70 roles. He considered his own best role to be that of Stalin (who he played various times) in Под знаком Скорпиона (Under the Sign of Scorpio, 1995) about Gorky after the October revolution. In fact, Kvasha played Stalin in a number of productions and Kvasha through playing the role seemed to be searching for an understanding of as he put it Stalin's "psychology and how he could subjugate a whole country and with what methods and what he did to achieve this" (меня всегда интересовала эта психология и то, как он смог подчинить страну. Какими методами? И что же он сделал для этого?). Kvasha would always try to find out from people who knew or had met Stalin answers to these questions.

Kvasha also played in many very popular films such as Mark Zakharov's Тот самый Мюнхгаузен (That very Munchhausen, 1979) alongside the great Oleg Yankovsky and Челове́к с бульва́ра Капуци́нов (The man from the Capuccin Boulevard, 1987), the immensely popular Western parody based on the subject of the birth of cinema. He worked with such great directors as Elem Klimov and Sergei Yutkevich and with Andrej Wajda in the latter's production of Dostoyevsky's Бесы (The Possessed) at the Sovremennik Theatre.