In Search of Lost Reality (1): On the 10th Anniversary of Art Doc Fest and Konstantin Selin's new departure in Russian Documentary. 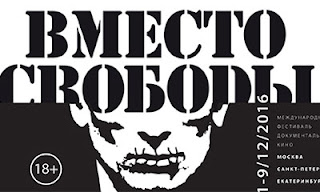 This year Art Doc Fest is celebrating its tenth anniversary and since December 1st this year's edition of the festival has been taking place at the Oktyabr Cinema in Moscow's central Novy Arbat street. (The festival now takes place also in St Petersburg and Ekaterinburg as well as Riga). Its expansion to other cities and countries marks something of a success, especially given the fact that after a frontal conflict with Russia's Minister of Culture, Vladimir Medinsky, has left the festival without even the meagre government funding it once had. So while the festival has its own 'patriarch' in Vitaly Mansky, it can boast of a total independence from the government (as well as permitting itself to exhibit a certain antagonism). It has become festival which doesn't hesitate to announce its conflictual relationship to the cultural bureaucrats in charge and even vaunts its oppositional reputation. Nonetheless, at the same time the festival nevertheless ensures that the programme is a very broad one. This year was no exception.

First there are always the major films which expect to attract the larger crowds - in recent years they've included films about corruption in the Sochi Winter Olympics and Khodorkovsky. This year, too a film on, Khodorkovsky was once again in the programme and two about the murdered opposition politician, Boris Nemtsov (one of them was already shown at last year's festival). Another major film event was the opening film on the actionist artist Petr Pavlensky (once again two films on this artist have been shown at the festival- see a subsequent post for my view of the Russian film on Pavlensky by Daria Khrenova which surely deserves international recognition, even more so than the German film which opened the festival). Some of these directly political films always ensure Art Doc Fest's reputation for its determination to show films anathema to the authorities, as well as full cinema halls and heated political discussions.And yet not always do these films turn out to be the most radical films either in terms of their cinematic value or even their political stance. Gentelev's Putin's Games shown three years ago will probably not go down in film history whereas other films shown to smaller audiences have much more likelihood in doing so.

In this sense arguably the most important film at this year's festival was a less conventional 'political' film precisely in the fact that it has shed light not on big politics (Putin, corruption, the martyrs of the liberal opposition) reported throughout the international media but about an extraordinary moment of popular resistance that went almost unreported in both the Russian and the international media. The story of long-distance truck drivers who managed, against the resistance of the authorities (with considerable police harassment and obstruction) and a news black out from all the main TV channels to win a strike and set up an authentically independent trade union in its aftermath will ensure Konstantin Selin's film Chronicle of a Revolution That Didn't Happen narrates Reality rather than fixing a political position. Selin's film is powerful in showing not so much a collective portrayal of struggle but the reformation (or rather transformation) of political consciousness in the process of a struggle. Following two protagonists but not extricating them from the collective moment, this film manages to merge the individual and collective story in a new way for Russian documentary. By balancing the individual and the collective stories and focusing on the transformation of consciousness of the film's protagonists, Konstantin Selin's Chronicle has achieved something relatively rare in Russian documentary and surely in this way his film will earn its place not just as an exploration of an unacknowledged story hidden from view (an example of Lost Reality restored) but also as an attempt to force through into a new cinematic territory merging the best of Russian documentary (its observational focus on the individual protagonist in his environment) with the addition of locating this in social and political reality and also picturing the protagonists dynamic transformation of consciousness as to this reality.