Sokurov on Eisenstein, Literature and Cinema

At Turin's 'Salone del Libro' (Book Fair) the one guest from Russia representing cinema was Aleksandr Sokurov who presented a book of essays which haven't been published in Russian. In fact, as far as I know, the only edition yet to come out is the Italian edition. The title of the collection is 'In the centre of the Ocean' (Nel Centro dell'Oceano). The essays are varied- from the film script of his film on the war in Chechnya 'Alexandra', to various work diaries and a selection of his Japanese diaries, from an essay on philosophy and Martin Heidegger to what for me was the most interesting text in the collection: a re-evaluation of the role of Sergei Eisenstein in cinema. An essay that needs to be read more than once given that it is very rich in observations. Sokurov, like Tarkovsky before him, have both tried to find an escape route from the influence that Eisenstein undoubtedly has in Russian and world cinema. Sokurov's placing of sailors in his film 'Russian Ark' was no casual choice: they were undoubtedly an allusion to Eisenstein's 'Battleship Potemkin' and not an allusion that had much of the positive about it. Sokurov's call is a call for a return to a pre-revolutionary ethos and whatever his respect for Eisenstein his is a call for pressing the delete button. Yet he knows, too, that this attitude is impossible. This, for Sokurov, is the dialectic of his dilemma.

Like Tarkovsky, Sokurov champions Dovzhenko over Eisenstein. The Dovzhenko who acknowledged the importance of atmosphere in the construction of a frame and who knew how to render human suffering and pain on the screen bringing cinema closer than anyone else to art and literature. Yet in the essay this is all he has to say about Dovzhenko. It is, nonetheless, Eisenstein with whom Sokurov wants to confront himself with, to clash with.

Sokurov's speech at the 'Salone del Libro' took the form almost of an anti-cinema diatribe. He stated that if humankind were left without electricity and there were no possibility of watching films any longer nothing much would happen, but if humankind were to be left without the book that, for Sokurov, would signify the end of the world. An extreme position but a fundamental one to understand Sokurov's place in cinema. For Sokurov, cinema is an imperfect and much too young art that doesn't have the weight of literature (and for Sokurov Nineteenth Century literature is central to civilisation as is Faust which he is filming for his tetralogy on Power (Moloch, Taurus and Sun being the three others taking a look at Hitler, Lenin and Hirohito).

What Sokurov sees as Eisenstein's negative influence is his extreme masculinity, his destructive energy (leading to a lapse into a cinema of unheard of cruelty- the child suspended from the staircase in Strike), that cinema has transformed the mysetry of death into a visual commodity and he even comes to the conclusion that this trend in cinema has led to the clash of civilisations.

Sokurov's critique (one might almost call it an attempted demolition) of Eisenstein is based on the premise that Eisenstein set cinema on the wrong track and that it is necessary to return and start on entirely new foundations. For Sokurov the return is to Nineteenth Century literature. He often exhibits a kind of nihilistic despair over the possibility of cinema. In Turin he stated that "cinema is where I work" but he had no fundamental interest in discussing this area. In his essay the only suggestion that cinema might find a new path is in a note explaining Mikhail Romm's return to a kind of Pushkinian montage. Sokurov suggests that Eisenstein could only really explore his artistic freedom in his drawings which illuminated both his thirst for freedom and his solitude. In spite of the enormous artistic resources of Eisenstein's cinema, Sokurov concludes that one discovers in Eisesntein the footnotes th the bottom of a page in which nothing is written.

Sokurov is one of the few to have put into words this total denial of Eisenstein which is common both to him and Tarkovsky. His is almost a Dantesque judgement- mixing compassion with condemnation and certainly is a judgement full of nuance. Both one of the most negative judgements on Eisenstein but also one of the most pregnant with insights into Eisenstein.
Posted by giuvivrussianfilm at 07:11 No comments: 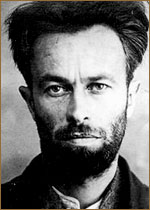 The book by Nissim says little about his actual films- just that they were "documentary films dedicated to the 'great successes' of Stalinist agricultural collectivisation" (p 184)- alas, he gives little more detail. The book also concentrates little on the detail of his cinematic work - the few details he gives are to delineate the just (some of his cameramen) from the unjust (a certain Britikov who would denounce De Marchi and go on to make a successful career in the Soviet cinema world as well as to block the career of De Marchi's daughter as actress). Nonetheless, she (Luciana De Marchi) was to work with Giuseppe de Santis on his film about Italian soldiers in the Soviet Union during the Second World War, entitled 'Italiani brava gente'. Nissim also speaks of a Russian film scripted by Lev Roshal on the life of De Marchi made in 1992. Another Italian in cinema who was to share De Marchi's eventual fate (that of execution) was Aldo Gorelli who was better known as Gheffi Torre and would work as a sound technician from 1932 at Soyuzdetfilm. Whether there were other Italians working in the Soviet cinematic studios is a field that deserves some research.
Posted by giuvivrussianfilm at 08:29 No comments: