Prince Lemon's (aka the Emperor of Bananas) hostile takeover of Russian theatre! 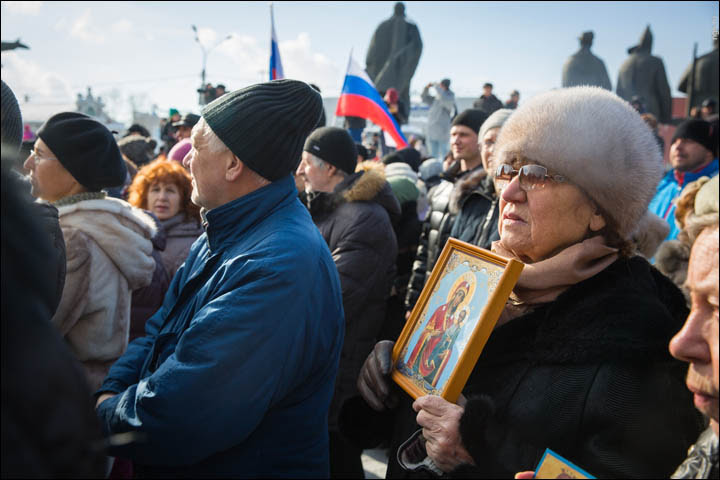 Living in Russia in 2014-2015 and trying in some way to make sense of what is happening in Russian culture feels like a daily battle for sanity. That once famous catchphrase that the lunatics were taking over the asylum doesn't feel radical enough somehow. Attempting to describe the sense of absolute impotence at the spectacle of the takeover of the Cinema Museum by a band of barely competent, ideologically-correct tools (patriotic and Orthodox hammers) is one of those moments when writing a detailed account almost feels like a kind of self-harm. How could all of this have actually happened? And was there really so little resistance? No permanent general strike by cultural workers? The story surrounding the Tannhauser production in Novosibirsk is also developing into another cause celebre which seems to signal yet another nail in the coffin for independent culture and illuminates one more stage in this story of culture wars going on since early 2000 between moralists (whether of church or state- and they are often the same) and independent artists that came to the fore so dramatically with the trashing of the Beware Religion exhibition at the Sakharov Centre in 2003. 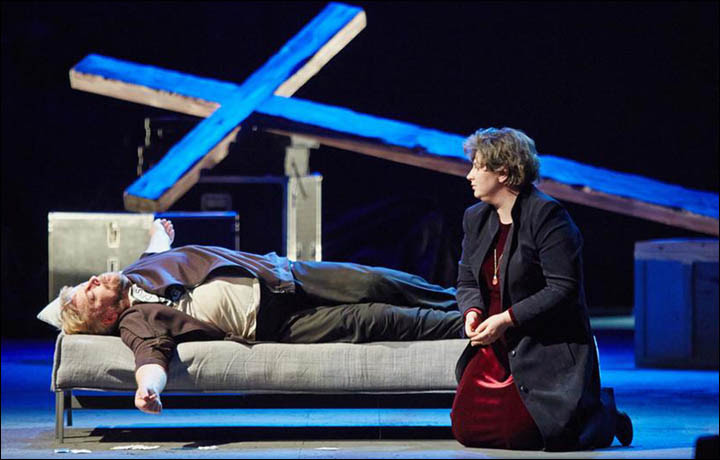 The latest stage in this saga could be deemed as the one in Prince Lemon took over the theatre (if you know your Gianni Rodari as many Russians do, or at least used to do). Prince Lemon today has arisen in the form of a former 'Emperor of Bananas' who goes by the name of Vladimir Kekhman. Having controlled the import of one third of the bananas which were brought into Russia in the 1990s and playing, in general, a not insignificant role in the development of Post-Soviet Russian capitalism he decided like Bulgakov's (or rather Gaidai's) Ivan Vasilievich that he wanted a change of profession. So the oligarch has in recent years turned ballet and theatre director. I'm not sure if history is very replete with this type of metamorphosis. Somehow I doubt it. Though I've always been intrigued by the fact that Silvio Berlusconi was said to have written a preface to a new edition of Erasmus's In Praise of Folly (I've still yet to get my hands on a copy of his actual text). Kekhman seems to be just as mired as Berlusconi in some very dubious business practices (if one knows Russian one could listen to this small item on Russia's independent Dozhd' television channel) and managed to find a typically British legal loophole to avoid any of the irritating trials that his Italian counterpart has been intermittently subject to. But instead of searching for political power to cover up his misdeeds he and others in the Russian elite are attempting the route of cultural domination.

From the import of bananas to the director of a major Russian theatre is not such a large step in contemporary Russia even if you have a few fraud problems with Russia's state bank. It seems that the trick is simple: supply a suitably patriotic or moralist quote for a Ministry of Culture website denouncing the blasphemous nature of a slightly ose' theatre production and, hey presto, you even get to bag the director's job a few days later. Here's the quote that Kekhman produced denouncing the Tannhauser production in Novosibirsk:

As a believer who has been christened in the Orthodox faith, and as a Jew, I take this [production] as an insult. It is a demonstration of internal godlessness in the style and in the spirit of a union of warring infidels. I won’t hide that I spoke today with Mezdrich and he told me that he won’t abandon this production and will stand to the end. I consider that he must resign and that this production must be removed from the repertoire.”


And soon enough a new job in the theatre world was coming the way of the banana emperor and this major new 'force' in the field of Russian culture. Prince Lemon (who Kekhman actually played in one of his own productions), it seems, in today's Russian post-Soviet form of oligarchic capitalism, wishes to direct theatres as well as selling bananas and real estate:

The grotesque figures directing and controlling culture in contemporary Russia - from Medinsky to Kekhman, - and those religious authorities like the Metropolitan Tikhon's, and assorted Chaplin's (along with the performances of the religious activists such as Enteo) who stir moral panics against any original artistic production not to their liking, is not (yet) the only story in town when it comes to Russian culture but it feels as though their aggressive and increasingly repressive bombardment of independent artists in Russia is reaching heights that feel vertiginous.

It appears that they won't be content until some form of 'moral control' is exercised at all levels of theatrical production. Reported comments from a high-level official in Putin's administration, Magomedsalam Magomedov, suggests that the state now wants to control theatre production before it gets into the repertoire. Moreover, with his dangerous talk of only showing productions which 'unite people rather than those that divide them' is quite clear that the state officials and the economic elites are interested in using the arts once again as a mobilizing tool in society promoting its own version of patriotic fervour.Whether the resistance of the theatrical and other artistic communities can amount to something real is yet to be seen. The public statements of support by people like Mark Zakharov are welcome as is the very public call from the independently-minded Russian Film-Makers Union to call for the reinstatement of Boris Maezdrich and the resignation of Vladimir Medinsky. How the cultural bureaucrats will react this latest act of apparent insubordination remains to be seen.
Posted by giuvivrussianfilm at 10:48 No comments:

For readers of this blog who don't read Spanish here is my attempt to summarize an interview with Naum Kleiman by Tatiana Pigiarova published here. Tatiana describes how in the rooms where Eisenstein's widow lived after the death of Russia's greatest film director amid the personal objects of Eisenstein - the Bauhaus furniture and the Mexican carpets can be spotted the figure of Eisenstein dressed up as Don Quijote mounted upon a movie camera which stands in for Rocinante.

Eisenstein's interest in Spain was multi-faceted. In his memoirs he spoke of Meyerhold's production of Calderon de la Barca's play El Principe Constante (The Constant Prince), the Spanish Baroque of Picasso and El Greco which was more of an inspiration to him than Italian Baroque- in fact he would write an article entitled El Greco and Film. Besides all this there was a script for a film entitled Spain set in Spain during the Civil War.

The puppet figure of Eisenstein as Don Quijote which was made by some artists for the Eisenstein Museum to commemorate the fact that Eisenstein was part of a short film where he took on the role of Don Quixote during a Congress of Independent Cinema in September 1929 (the first film festival in history). The avant-garde filmmakers from all of Europe (as well as from America and Japan) met in Switzerland at the Sarraz Castle invited by Helene de Mandrot, the owner of the castle and an art enthusiast. Eisenstein, Alexandrov and Tisse were in Germany at the time waiting for their visas to get to Hollywood and decided to join the other film-makers there. So as well as the future General Line (or The Old and the New) Bunuel's Le Chien d'Andalou were projected. Bunuel himself was expected but didn't turn up. And between jokes and discussions the participants decided to shoot a film at the festival. The idea for the film was inspired by Eisenstein and Hans Richter: the struggle between the independents and the 'great names'.

They were aided by the French critic and author of a book on Eisenstein, Leon Moussinac (dressed as Artagnan) and Jean-George Auriol, the editor of the Revue du Cinema who, using typewriters at the Congress as machine guns launched an attack behind banners made from journals. These two quickly developed the script of this work which entered cinematic history as The Storming of La Sarraz and was also directed by these critics. Tisse' filmed it with his camera and the castle stuffed with medieval relics acted as the set. Madamoiselle Bouissounouse from the Revue du Cinema with a white dress and reels of film around her bust  and fastened by chains to the castle was to incarnate Independent Cinema. Her defender, the caballero Don Quixote (interpreted by Eisenstein) carried his medieval armour, helmet and lance and mounted upon Rocinante, his trustworthy movie camera.

Independent Cinema was to defeat 'Commercial Cinema' impersonated by the Japanese Moitiro Tsutji who was to commit harakiri. Eisenstein recalled that the castle owner was to remember both him and Tisse with fond memories and would repeat to herself a refrain "Ah those Bolsheviks, those Bolsheviks, the only real gentlemen".


Enough proof suggests that this film did exist at one point with certain images having been preserved by the Cinema Museum. Photograms of Jean-George Auriol with his typewriter-machine guns, of Leon Moussinac dressed up as Artganan and Eisenstein in medieval dress playing Don Quixote still exist. It's thought that the film was taken by Hand Richter to London to develop and edit and that possibly it was lost in the train or was confiscated by customs.

The story of Eisenstein and Don Quixote didn't stop there and in fact Eisenstein had been approached by Feodor Schialapin to make an adaptation of Cervantes novel. However this project was to be realised not by the Soviet director but by Pabst (though still with Schialapin in the main role).

Eisenstein is still present in the film of Don Quixote that was eventually adapted by Grigory Kozintsev in 1957  through the influence of the 19th century caricaturist and painter Honore Daumier. Eisenstein's wife Pera Atasheva was to donate to Kozintsev several books and reproductions of Daumier which had belonged to Eisenstein. One such reproduction was to hang in Kozintsev's office and through Eisenstein would influence the aesthetic of Kozintsev's 1957 film adaptation of Cervantes' novel. (Eisenstein's script Spain also found its way into his film Alexander Nevski).

Posted by giuvivrussianfilm at 12:24 No comments: