Some Art Venues in Moscow -1 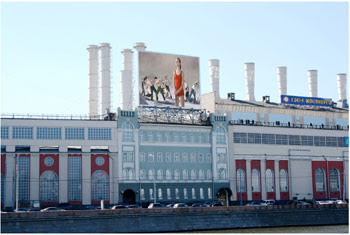 A couple of years I posted on various film venues to be found in Moscow http://giuvivrussianfilm.blogspot.com/2010/05/blog-post.html This time I thought it would be worth writing about some art venues in the capital of Russia. There are too many to actually do justice to and perhaps it is not really worth giving more space to the really large and estabished museums such as the Tretyakov galleries and Central house of the Artists, or the well established Pushkin Museum of Art or the nearby museums including the Museum of Personal Collections. These museums are so well documented in any guide that it would be pointless to add much here. However, I thought I'd try to write about some of my favourites and hope that I will continue on another post.

1) One of the largest complexes of art space is the Garazh Centre for Contemporary Culture http://www.garageccc.com/en. This space is actually moving this spring to Gorky Park. It is not necessarily a favourite of mine (for reasons as much political as cultural) but most definitely has had some spectacularly important exhibitions. Most recently it hosted two of the greatest contemporary artists alive in the world today: Marina Abramovic' and William Kentridge and last year hosted an important extended cinema exhibition devoted to the works of Isaac Julien, Eija-Liisa Ahtila and Yang Fudong. Another major exhibition was devoted to Cuban photography during and after the revolution. Rothko and David Lynch were other exhibited artists and the centre was inaugurated in September 2008 with a major retrospective of Ilya and Emilia Kabakov.

2)  Another major art centre in Moscow is the Vinzavod Complex http://www.winzavod.ru/eng/ It is a complex of tens of small galleries some of which are more interesting than others. My favourites are the Proun gallery (which always seems to exhibit the more historical art - at present it has a collection of family portraits of Russian avant-gardists Nadezhda Udaltsova and Aleksandr Drevin http://echo.msk.ru/blog/tatiana_pelipeiko/861425-echo/ Other exhibitions included one devoted to Georgian artist Niko Pirosmani as well as another exhibition of rare cinema posters from the early years of Soviet cinema. The gallery has small exhibitions but the quality of artwork well compensates for its small quantity. The Marat Guelman gallery in Vinzavod is also usually well worth a visit. http://www.guelman.ru/gallery/moscow/

3) The photographic arts are well catered for in Moscow. Apart from large exhibitions such at the Photography Biennale held at the Manezh, the largest space for photography is the newly reopened Photography Museum called the Multimedia Art Museum in the Ostozhenka. Now housing seven floors of exhibits it has housed some really fabulous exhibitions. http://www.mamm-mdf.ru/exhibitions/ A film buff would be particularly interested in the photographs of Stanley Kubrick taken between 1945-1950 http://www.mamm-mdf.ru/exhibitions/history-in-photographs-1945-1950/ Another favourite of mine was the retrospective of photographs of the Spanish photographer Alberto Garcia Alix.

4) A smaller photographic centre is the Bratiev Lumiere http://lumiere.ru/ located near the old Red October Chocolate factory. Its recent exhibition of Italian neorealist photography as well as the Koudelka exhibition this autumn http://afoniya.wordpress.com/2011/10/23/koudelka-exhibition- in-moscow/ are only two of the fascinating exhibitions held in this small centre. The Italian neo-realist exhibition was accompanied by the showing of Italian neo-realist classics in its centre. At present an exhibition of Silver Age St Petersburg photography is exhibited alongside an exhibition documenting recent political demonstrations for political changes in Bolotnaya Ploshchad and Sakharov Prospekt.

5) Cinematic subjects are regularly touched upon in one of the most interesting art museums of the capital Dom Nashchokina http://domnaschokina.ru/ Exhibitions dedicated to Otar Ioseliani and more recently to actress Liudmila Gurchenko have been supplemented by a whole range of very high quality exhibitions ranging from photographs of Che Guevara to artists ranging from Zinaida Serebriakova to Anatolii Zverev.

6) Talking of Zverev 160 items of his art are presently being exhibited http://english.ruvr.ru/2012_02_17/66299601/ at the Ostroukhov branch of the State Literary Museum http://www.goslitmuz.ru/ru/ostrouhov-museum This museum is becoming one of the most interesting of Moscow's museums having only recently exhibited one of the great Russian animators Alexandre Alexeiff http://giuvivrussianfilm.blogspot.com/2011/10/alexandre-alexeieff-one-of-great.html

I hope in another blog to add some more venues to this list of major art venues in Moscow.

Posted by giuvivrussianfilm at 03:41 No comments:

I have written a number of times on this blog about the many links between Italian and Russian or Soviet cinema and this is another occasion in which I will do so. The motive is a new documentary film by the director of 'La Bocca del Lupo', Pietro Marcello. Marcello's attentiveness to Russian and Soviet cinema was highlighted in an interview published in the Russian review 'Seance'. A wide-ranging interview occasioned by the showing of his documentary film 'The Silence of Peleshian'. The film, commissioned by Italy's Rai Tre (at times an oasis of cultural excellence that somehow survived the asphixiation of culture by Berlusconian videocracy), is a portrait of the figure of Artavazd Peleshian and was shown to great acclaim at the Venice and Rotterdam film festivals. Peleshian has been described by Russian film critic Oleg Aronson as the only real successor to Soviet montage cinema of the 1920s and it is an immense shame that his name is not known more among cinephiles. While Jean Luc Godard is reported to have said that he is willing togo down on his knees in fornt of the director, Peleshian is not a household among either in Russia or abroad. Marcello stated that half of the film journalists at the press conference had never heard of Peleshian and the other half were surprised that Peleshian was still alive.

Marcello in this film- made with the agreement of, in the presence of and with the participation of Peleshian (even though Peleshian is not interviewed in the film, hence the title) - also attempts to display his own relation to Soviet cinema. In the interview with Seance, Marcello talks about his favourites. He rates Sokurov's 'Faust' as the strongest film and has a rather critical view of Zviagintsev's 'Elena'. He praised Khomeriki's film 'Hearts Boomerang' («Сердца бумеранг»). In terms of periods in Soviet cinema, he singles out the Thaw period stating that he believes Khutsiev's 'July Rain' («Июльский дождь») to be the best film of that epoch. He adds that Shukshin is a kind of Russian Pasolini (albeit without the bourgeois origins of the Italian master). Pietro Marcello's acknowledgment of his debt to soviet cinema and the 'distanced montage' of Peleshian (which becomes explicit in his film homage) is yet another sign that Russian/Soviet (Peleshian like in part the great Paradjanov being Armenian rather than Russian) and Italian cinema have extremely strong ties. (Sokurov's insistence that his book of essays and sketches should be first printed in Italian is yet another sign of these close links). Marcello's extraordinary and hitherto lesser known film 'Il Paesaggio di Linea' (available on youtube http://www.youtube.com/watch?v=RLNjCAMu9rE) was shown by Sokurov to his students in Nalchik as an example of how to treat reality in documentary cinema.


Posted by giuvivrussianfilm at 00:38 No comments: