Alexandre Alexeieff - one of the great masters of world animation.

Moscow's Literature Museum have offered Moscovites a real treat with its exhibition presenting the art and animated films of Alexandre Alexeieff- a Russian artist who in spite of spending spent all of his creative life outside Russia can not really be seen as anything other than an artist deeply wedded to a Russian mentality and Russian themes. His illustrated art was concentrated on Russian literature and his animated art was equally Russian-centric - Mussorgsky and Gogol. Alexeieff's invention of a pin screen technique can be seen as a precursor of many contemporary animation techniques using computer software and yet it was Alexeieff's desire to animate his book engraving maintaining its texture and chiaroscuro effects that led him to animation. Moreover, he rejected any commercial techniques that were then in vogue. In fact, his  invention -the pin screen-  certainly brought no commercial benefits. The work on an animated film with this technique was laborious and the first film made by Alexeiff and Clair Parker - A Night on Bare Mountain - would take over a year and a half to make. Alexeieff managed to keep his art pure from commercial constraints by earning his living through advertising work where he would use more conventional animated technqiues. His pin screen films would make nothing (he refused to use them for commercial use) but they would leave an artistic legacy of enormous potential.


Nikolai Izvolov, in a fascinating essay printed in the catalogue to the exhibition, links Alexeiff's artistic research to a search for the fourth dimension linking his attempts to those of Kibalchich and Tsiolkovsky in their meditation on rocket and space science while imprisoned (Kibalchich) or working as a provincial mathematics teacher (Tsiolkovsky), or to the revolutionary Morozov whose reflections on the fourth dimension were made in a dark cell in Scliesselburg and finally to Eisenstein's notion of harmonic montage as being the fourth dimension of film. Izvolov concludes his essay by stating that Alexeieff strove all his life to stray in a space where consciousness and unconsciousness are on an equal footing. One of the few artists who seems to have travelled on a journey akin to that of Alexeiff is Yuri Norstein, the author of another article in the catalogue. Norstein calls Alexeiff one the great makers of animated film, far superior to that of producers such as Disney and he goes on to state that "Alexeiff was the first animator to place animated film in the context of world culture, to have grapsed the musical essence of the art of animation." The works that he created "are neither caricatures nor cartoons, but works whose dramatic action constitute the very essence of figurative art". 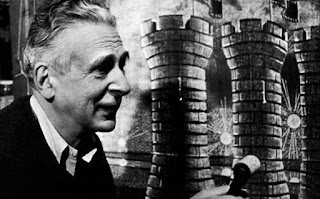 The exhibition in Moscow promotes the work of an artist whose real contribution to animated film has yet to be fully understood. A truly original master.