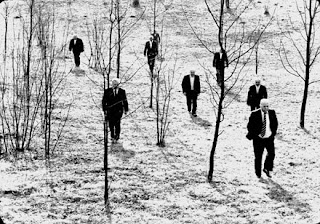 Museum of Contemporary Art as part of the 4th Moscow Biennale of Contemporary Art is hosting a full-scale exhibition on Necrorealism. Not simply the films of Necrorealism but also the art work. Necrorealism has clearly come of age as far as the Moscow art establishment is concerned and this offering is a more than welcome one. The fact that some of the films are supplemented by texts (on necro dynamics, necro statistics and necro methodology), and some extraordinary art work and installations allows one to see the bigger picture of this movement.

Its appearance during the late Soviet stagnation period (the stagnation was to prefigure the appearance of a future corpse- the Soviet system) and its obsession with death was to lend itself to a certain reading which, although not necessarily mistaken, has arguably failed to account for the repeated significance of this movement. Once dubbed the Lenin of the Punk movement (Russian lead punk singer Svinya was said to have remarked that it was Iufit rather than Johnny Rotten who should be seen as the true leader of the world punk movement), Evgeny Iufit was clearly a much more significant figure than has hitherto been recognised by most contemporary film critics. The necroperformances in which passers by would be horified by the appearance of presumed corpses after a staged fight and the early films made in the early eighties would become part of the Leningrad underground scene.

Iufit's move into 35mm filmmaking was facilitated by Aleksandr Sokurov who allowed him to work within his new Independent Studio in 1988. Iufit made his Knights of Heaven (Рыцари поднебесья) film there but this film was to signal a break between Sokurov and Iufit. Nonetheless the presence of the theme of death (and an unconventional approach to this theme) unites Sokurov's and Iufit's cinematography. Equally there are many references in Necrorealist film to Lang's expressionism as well as to Vertov and Eisenstein and to 1920s eccentricism. Even Andy Warhol's interminable shots seem to be another influence.

The exhibition gives us a chance to see some of the extraordinary works of necrorealist painters - including Iufit's but also that of Sergei Serp, Vladimir Kustov and Andrey Mertvy. In the case of Iufit this chance to see both some of his films as well as his art work offers an opportunity to assert the continuity of his essential vision. In Iufit's own words "the irrational force of nature, the pathology of the human mind, black humour and social grotesque incombination with the traditions of silent film, define the originality and the paradoxical nature of this movement."

That Necrorealism as a movement requires rediscovery outside of Russia has been argued in a splendid essay by Thomas H. Campbell in which he asserts that Iufit's body work represents a thoroughgoing "allegory of the social, political, psychological, artistic, and critical dead ends of the present day". http://www.kinokultura.com/2006/11-campbell.shtml#27 Whether it be true or not that Iufit is the only decent filmmaker working in Russia today as one of his more enthusiastic advocates argued in 2005, it is certainly true that Necrorealism must be considered as one of the most fascinating trends with late Soviet and early post-Soviet cinematography and art and deserving of a major reappraisal by major film and art critics.
Posted by giuvivrussianfilm at 10:38