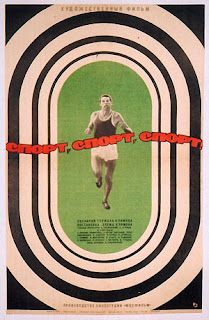 I have been reading a new history of Russian cinema written by Birgit Beumers (probably the most active writer on Russian cinema in the UK today, along with Julian Graffy). Well her book is one of the few which try to look at the whole history of Russian (and to some extent Soviet film from its inception). An unenviable task as the years to the death of Stalin are unforgettably and brilliantly captured in the classic account 'Kino' by Jay Leyda. Single periods and genres are also brilliantly written about and a whole host of new readings are available. The immense scholarship behind the Russian 'Kinovedcheskie Zapiski' journal including giants like Evgeny Margolit, Naum Kleiman and the late Neya Zorkaya means that a new version covering the whole of Russian cinematic history is long overdue. Well I expect to expand on the virtues and shortcomings of this new history in weeks to come but my first impressions are coloured by films that Beumers hasn't mentioned. My first gripe is that she has completely neglected a few classics of Stalinist cinema - Room's 'A Strict Youth', Kuleshov's 'The Great Consoler' and Barnet's 'By the Bluest of Seas' are not given a single mention between them.

Moreover, her account of Klimov's films neglects his 'Sport, Sport, Sport'. Since I spent a month or two last year watching the film about ten times to translate the film and then help to insert the subtitles I think that this is one of the most neglected and more fascinating films that need to be rehabilitated. The film director, Aleksander Sokurov, has spoken of how he feels this to have some truly unique features that surprise him more than Klimov's much better known 'Come and See'. As last year I spent some time trying to research Soviet sports films I feel that there are a few more gems to come in this completely under-reserached region of Soviet film (even in Russia it is genuinely difficult to unearth scholarship about this genre of film). Anyway apart from 'Sport, Sport, Sport' there are potentially some fascinating films from the 1920s dedicated to fizkultura and one dedicated to the 1929 Spartakiad. Yutkevich made a film in 1946 that was fulsomely praised by Matisse (but is simply ignored by scholarhsip). Many films were shot in the 1970s (to be honest amidst a lot of dross especially by Victor Sadovsky all of whose films were sports films and, alas, rather poor and conventional ones) but there were some really curious films like 'Girl with a pony-tail' and 'The new girl' which deserve some scholarly attention.

However, it is Klimov's film which stands as one of the very central films in this genre. A documentary film with fantastic elements it is as much an experiment in style and pivotal in Klimov's move from comedy to tragedy. Sport seen like in this film has rarely been seen before or since. Maybe a flawed masterpiece (Klimov was highly critical of it) yet it has enough of a unique vision for it to merit mention in a history of Russian cinema.
Posted by giuvivrussianfilm at 09:45