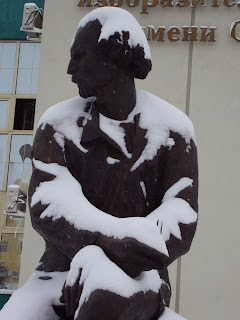 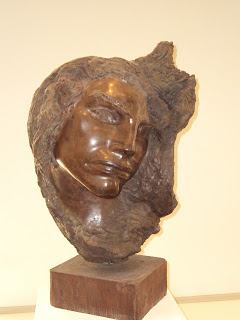 A trip to Saransk in September 2001 was the first time I would hear of Stepan Erzia, a sculptor from a Mordovian tribe who would spend most of his life outside of Russia living for over two decades in Argentina and also spending years in France and Italy. A further exhibition in Moscow later in the same year meant that for the first time I could see a selection of his sculptures. (In Saransk as far as I remember the museum was closed for reconstruction). It is only now that I have decided to return to the city and visit the museum which holds the largest collection of his works. A whole floor of the museum is devoted to Erzia’s sculptures and the chance to see some like his sculpture of Moses is undoubtedly a rewarding experience. While it is stated that the Museum holds two hundred of his works, less than a hundred were on display. Many of these were those produced in Argentina with new materials such as the quebracho and algarrobo and yet it was well before this period that Erzia made a name for himself.

Erzia would become Mordovia’s most rooted and yet most cosmopolitan and universal of artists owing much to his extraordinarily errant life story. His birth in a small Mordovian village – Bayevo- to a family of peasants in pre-revolutionary Russia meant that his development as artist was no simple one. In fact his professional education would only begin at the age of 26. Nonetheless, his assimilation of this training was very rapid. His revolutionary sympathies with the 1905 revolution would lead him to emigrate to western Europe in 1907  due to the repressive climate of the aftermath of the revolution. His trip to Italy and then France would lead him to absorb all the influences of classical Italian sculpture as well as more contemporary European sculpture. He would visit the studio of Rodin in Paris and be influenced by the tragic images of this sculptor as well as the bright expression of images (a greater influence than the exuberance of Italian impressionists). A return to Italy in 1914 would lead to his mastering of marble (given his presence in the marble capital of Massa Carrara). Amidst his works created in Italy were the figure of St John the Baptist created for the cathedral in la Spezia and a figure of a Priest. A friend of his, an inspector of museums, Ugo Nebbia, would write a novel based on the life of Erzia in Italy entitled ‘Il Viandante’ (The Wanderer).

Erzia would return to Russia in 1914 at the eve of World War One and although he planned a rapid return to Western Europe (leaving his sculptures in European studios) he was not to return for over a decade. His marble sculptures in the latter period of the 1910s allude to the influence that symbolism was to have in this period of his career (‘Repose’ in 1915 and his monumental ‘Dream’ (1919) were the two most notable examples of this influence). Post-revolutionary times would show him active both pedagogically and in the erection of public and monumental sculpture in Yekaterinburg, Baku and Batumi. Influenced by the work of Sergey Konenkov he would change from using marble to wood- this search for a new style would become evident in his time in the Caucasus and a certain modernist influence is perceivable in his work ‘Flying’ – the influence of Vrubel’s ‘Demon’ is detectable in this work.

His exhaustion of the revolutionary theme was becoming palpable and an invitation to Paris on the behest of Lunacharsky would evidently lead him on to a new odyssey which would mark his mature years. Due to the difficulties of travelling within Europe Erzia would arrive in Argentina via Montevideo and then spend two and a half decades working with quebracho and algarrobo (two types of wood) to model some of the most impressive of his sculptures. The hardness, the wide range of hues and the expressiveness of quebracho would especially lend itself to Erzia’s sculptures and the expressive contrast between the polished and the unpolished in these works are central to his unique place in contemporary sculpture. The contrast in style between the male (more expressive and indicative of a sense of abandon and hopelessness) and female (more full of grace and perfection) portraits is an especially significant indicant of his work. His models of different national types are another important feature of this period. His return to a Mordovian theme reflected in some ways a sense of homesickness.

His return to the Soviet Union in 1950 would be a return marked with both initial neglect and it was only after Stalin’s death that an exhibition of his works would be staged in a showroom on Kuznetsky Most in Moscow. This exhibition in 1954 would be one of the first artistic signs of the post-Stalinist thaw. However his final years were a mixed time in which he live in a country which he barely recognised. He died in 1959 (according to one legend he died after tripping onto the statue of his head of Lenin hitting his own head against the head of the leader of the world’s proletariat). He was buried in Saransk.
Posted by giuvivrussianfilm at 04:02