Some thoughts on Pussy Riot (A polemical introduction) 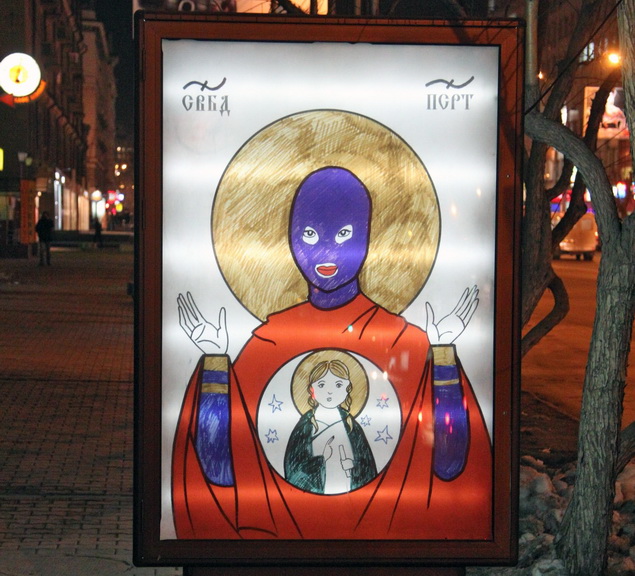 Having intended to write my next post on Sokurov's 'Faust' in the past weeks there has been little else on the culture front than the 'Pussy Riot' scandal here in Russia. Even though this subject is not a cinematic one it is impossible to ignore it. Impossible because religion has been encroaching on cultural life in Russia to such a disturbing extent that it has affected and poisoned all areas of culture including film. An earlier post of mine noted the increasing number and tendentiousness of religiously based films in recent Russian cinema http://giuvivrussianfilm.blogspot.com/search?updated-max=2010-02-25T01:37:00-08:00&max-results=20&start=20&by-date=false and the 'religious plague' as I called it then seems only to have increased in pace. The Khotinenko's, Mikhalkov's and Burlayev's are only the most visible representatives of this trend first identified by Frederick Jameson in a footnote on his splendid article on Soviet Magic Realism in 1988. The link between autocracy, Orthodoxy and nationalism has also been exemplified in the appalling 'Admiral' a few years ago.

The signs that Orthodoxy was going to launch a frontal assault on cultural diversity and attempt to impose a quasi-totalitarian grip on the arts have steadily grown more evident. The scandalous persecution of the Sakharov Centre, art curators as well as humanist or secularist artists and the accompanying hooliganism of fanatical Orthodox thugs was most evident during the 'Beware Religion' (Осторожно, религия!) exhibition in 2003 ( along with evidence that the state was actively supporting these trends): this was surely one of the the first and most worrying signals of this threat. 2012, however, has seen this assault threatening to blow up to ever more absurd proportions. The Mikhalkov scandals in the Union of Cinematographers http://giuvivrussianfilm.blogspot.com/2010/04/schism-in-cinematographers-union.html as well as the attempt to force feed the contemporary Russian viewer with his national Orthodox re-reading of World War Two http://giuvivrussianfilm.blogspot.com/2010/04/burnt-by-sun-2-cranberry-soup-quick.html have been two more (among many) examples of this national-patriotic-religious tendency in the arts. However it has only been this year that the assault by the hierarchy of the Russian Orthodox Church and assorted nationalists and black one hundred мракобесие has become blindingly obvious to all and sundry. The story surrounding the takeover of the weekly newspaper/journal Культура (the voicepiece of the Russian intellighentsia which had always given one of the most detailed and knowledgeable accounts of trends in all the arts) and its 'conversion' into a ranting rag in which its editor - previously Mikhalkov's ranter-in-chief  in the newspaper Izvestia, Elena Yampolskaya - can rave, harangue and spew her poisonous diatribes against all the enemies of Orthodoxy.

With this journal under their belt, the Orthodox Black Hundred claque have felt it possible to move on to new territory. Diatribes, rants and harangues are not enough- the acquisition of the voice of the dwindling intelligentsia is such a small catch compared to the opportunity they decided to grab with both hands after the irreverent performance of one of the more radical art groups - the masked and anonymous feminist punk outfit 'Pussy Riot' - at Moscow's Christ the Saviour Cathedral. An initially quiet church reaction was revved up into hysteria by such church autocrats such as Vsevolod Chaplin and in turn they instigated more hysteria in the media and in society.

The polemics over the detention of band member's, the calls for leniency amongst more reasonable members of the Orthodox Church, the increasingly fanatic stance taken by Chaplin leading him to assert that holy shrines have more value than human life, and the violence of many orthodox national-patriots against pickets in solidarity with Pussy Riot- a violence given an endorsement by those in the Church like Chaplin who, in the face of the absurd seven-year sentence that alleged members of the group have been threatened with, complains that if the state will not punish blasphemy the 'people' will. By 'the people' he appears to mean his band of thugs and hooligans- all these facts have been at the centre of attention here in Russia in the past month.

While all this, of course, is mainly straight polemics it is nonetheless the wider context from which Pussy Riot and groups like 'Voina' have sprung and have tried to resist in their own inimitable way. Their reaction has been, in many instances, radical and, given the context, militant. It is surely difficult to judge them in purely artistic terms because of this context. They deserve, I believe, all the solidarity that they can get - facing a seven year jail sentence, a hysterical campaign in the state-run press and being threatened with losing the custody of their children is the kind of vile atmosphere that militant secular humanists and fighters for 'unpopular causes' such as feminism and LGBT rights are increasingly forced to face. Their two month arrest before the actual trial contrasts nauseously with the house arrest given to police officers who violated a prisoner to death with a champagne bottle in the city of Kazan. The downplaying of real violence or ,rather, the emphasis on offense, blasphemy and sacrilege so as to justify the downgrading of human life and the incursion of religious fanaticism into culture has been to me the most worrying aspect of the past few months. In another blog, however, I hope to continue the argument regarding Pussy Riot linking it to other manifestations of artistic dissidence and dissonant trends reacting against clerical Orthodoxy or more openly anti-clerical manifestations. Here for now ends this polemical introduction to the subject. My next post hopefully will be of a more historical character. For now I'll leave readers with Vysotsky's Моя цыганская and his prescient words:

In the church; stench and gloom,
Preachers burning incense.
No! Even in church everything's wrong,
Not as it should be.