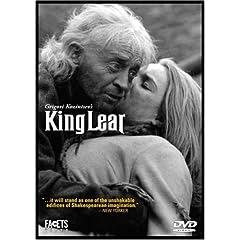 Last weeks Times Literary Supplement came out with an article praising Kozintsev's Korol Lir (or King Lear) as the adaptation on stage and screen "closest, not just to the radical energies of Shakespeare's play, which interrogates the political uses of land, but also to our own twenty-first century fears and preocupations about what we do to the land - and what it does to us". An interesting article which calls for the reappraisal of this fascinating film that was made on the cusp of the period between the end of the thaw and the setting in of Brezhnevian stagnation.

The article by a trio of authors (Richard Margraf Turley, Howard Thomas and Jayne Elisabeth Archer) argues that the vision of Kozintsev was much closer to Shakespeare than that of Peter Brooks due to its acknowledgment that Shakespeare's play is an arable play. A powerful argument is made by the authors but this is marred by some really silly lapses of judgement and factual howlers. Stating that "situating some of the play in a plain by the Caspian Sea ... (Kozintsev) brings to play his own childhood memories of disease and famine under Stalin" is alas a real howler - Kozintsev was a well-established film director under Stalin and no child! Equally calling Kozintsev a dissident film-maker is giving a whole new meaning to the word dissident which it simply doesn't have. Kozintsev definitely wasn't a mouthpiece for state ideology and managed to carve out his own autonomous space but no, he wasn't a convinced disident a la Solzhenitsyn either. In spite of these qualms it is nice to read an article evaluating a Soviet film so highly as being the closest adaptation of Shakespeare.

A clip from the end of the film is shown. The script of the play is from Pasternak's translation and the soundtrack is Shostakovich's. Can't get much better than that.
Posted by giuvivrussianfilm at 11:03