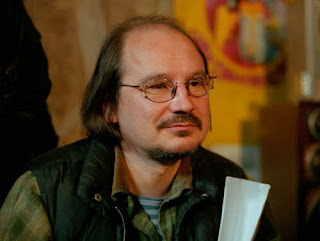 The irony of Alexei Balabanov dying in the midst of the Cannes festival - a festival like many others which never really gave Balabanov his real due as one of the leading directors not just in Russia but further afield- feels a little like James Joyce or Jorge Luis Borges dying in the midst of a Nobel Prize for Literature ceremony awarded to a writer destined to be soon forgotten. Balabanov may not quite have the stature of a cinematographic Joyce or Borges but the failure of Cannes or other major festivals to fully acknowledge his works has something scandalous about it. Venice last year accorded his final film Я Тоже Хочу (Me too) a certain publicity, although as a review of it in The Hollywood Reporter suggests it wildly divided those who it 'dazzled and delighted' from those who were 'baffled and annoyed by it'. I've always seen Balabanov as being somewhat in the shadow of that other great maverick, Kira Muratova, but then it could only be someone like Muratova who could possibly overshadow Balabanov. The disturbing nature of these two directors' films sets them apart from the generally ultimately conformist bunch of all too-many contemporary Russian film-makers. Yet the fact that both have so often been ignored at the major film festivals- whether Cannes, Berlin or Venice - reflects something in their nature of being among the most disturbing analysts of present-day reality.

If anything Balabanov gets the etiquette 'the Russian Tarantino' as though western critics are still stuck with his Брат & Брат-2 (Brother & Brother -2) films as the indicator of his entire oeuvre. Balabanov was far more versatile than that of course and his subsequent films showed him as a film-maker able to move from popular cinema to a much more deeply raw film-making that was never art house (not taking away from the fact that Брат was for many the film of the 1990s in Russia).

His what was to be his, prophetic, final film has been so well analyzed by Anna Nieman that there seems little to add to this brilliant exposition of the films - her linking his vision here to the philosophical perspectives of Dostoevsky and Fedorov comes across as demonstrating Balabanov's transhistorical relevance and, as Yuri Gladikshchikov has put in an obituary piece for Moskovskiye Novosti his meditation on Russia has much of the force and the paradoxes of great thinkers of 19th ad 20th century literary greats. Balabanov never avoided extremes and so he has been accused of everything from extreme nationalism to Russophobia. Yet his vision, scabrous but of incredible depth and force reminds one, at times, of that great paradoxical figure of Vasily Rozanov.

There is simply too much to recount of Balabanov - he will surely live a very long afterlife precisely because each film added to the paradoxes of his vision. That he was in many Russia's most European director never really helped him to open up the European cinema world to his vision. Cannes is no longer the place for mavericks as its exclusion of Lars von Trier demonstrated. (While von Trier made it, the door to Balabanov was closed very soon after he first appeared). It was left to smaller film festivals to award the film prizes to Balabanov's films that the major festivals ignored. Even his 'Brother' was only awarded prizes at smaller festivals in Cottbus or Trieste. His extraordinarily gloomy but unforgettable Груз 200 (Cargo 200) was ignored by all of Europe's festivals except Rotterdam and the list goes on. His final cameo role where he introduces himself as a member of the European Film Academy surely is tinged with great irony and sarcasm given the lack of recognition that Europe gave him.

In many ways it was Anna Nieman who, in her essay on Me, Too, who comes closest to describing Balabanov's particular prototype and place within film using his extraordinary short film Трофим (Trofim) as illustration:

"When it comes to Balabanov’s oeuvre, the accusations of the “dull” simplicity and “trivial” conventionality are part of the course. Balabanov is routinely “discarded” by a good part of the film press—much in the same way that in the short Trofim, a segment in The Arrival of the Train (Pribytie poezda, 1996), the last proof of existence of the title character, captured on the precious celluloid, is dumped in the trash by the fictional director. The simpleton peasant, with the naiveté of Ivan the Fool, stubbornly shoves his bearded face into the camera lens of an early French filmmaker, trying to interact with the camera, as if insisting on leaving a trace in history. Balabanov is Trofim-like in his relentless effort to populate the screen with his road-tripping gangsters; the black jeep keeps crisscrossing the former Empire to the soundtrack of Russian rock set on repeat.  " (Anna Nieman)

Watching Trofim one can't help thinking of Balabanov's own destiny as echoing that discarded, declassified element. Just as in the film Alexey German discards the frames of Trofim shoving his face into the camera as not fit for use, the selectors of Cannes and other major international film festivals selectors and all-too mighty critics discarded Balabanov's films. Their ignoring this particularly maverick film-maker will only put then to great eternal shame in future years.

POSTSCRIPT: The sad news of Balabanov's death almost coincides with the publication of what promises to be a major English-language study by Florian Weinhold of the genre major films of the director released between 1997 and 2006. His book Path of Blood , as Stephen Hutchings puts it in the foreword,  succeeds in challenging many of the conventional wisdoms surrounding Balabanov’s work adding that what is clear is that Weinhold’s book is a fitting tribute to a director, the like of which Russia (and, arguably, the international cinematic canon within which he can now claim a place) has never seen before and, perhaps, will never see again.  Both Stephen Hutchings foreword and Seth Graham's afterward can be read here
Posted by giuvivrussianfilm at 02:52