Writing in my last post about the absence of the two Pussy Riot films at Art Doc fest, I wrote:

The two films on Pussy Riot were conspicuous by their absence - both the Lerner and Pozdorovkin film which attempts to provide a certain 'objective' glance and the much more 'subjective' (but in my view more interesting) film produced by the film collective Gogol's Wives (the failure to show the Lerner and Pozdorovkin film probably reflects some circumstances beyond the control of the directors of the festival given that the film had been planned to appear at the festival).

This evening the planned premiere at the Gogol Centre in Moscow of Michael Lerner's and Maxim Pozdorvkin's film Pussy Riot: A Punk Prayer has been openly blocked by Sergei Kapkov (who heads culture in Moscow and was seen as a bit of a liberal). In a letter printed on Kirill Serebrennikov's (who has been in conflict with the Culture bureaucrats before over the funding of his Tchaikovsky film) Facebook page, Kapkov writes that he was surprised to learn that the film had been announced along with the participation of the former Pussy Riot detainees. He stated that a government funded organization should not associate itself with people who have such an ambivalent reputation in society and whose activity is based on provoking society. He then went on to say that while he had no right to interfere in the repertoire of the centre this showing was not part of the agreed repertoire and so he demanded that this event be pulled. Finally he added a few words about the fact that their common purpose was one of mending the world and not that of "shocking the public with scandalous stories which have no relation to culture". Serebrennikov's facebook comment, filled with expletives - which should make it unprintable in the media under new anti-swearing laws- set out the situation as he sees it. A clear act of censorship and pointing his finger at those in the film world who have agreed to the 'Ethical Charter' (a kind of Hays Code) to be implemented in cinema. The comment began, as quoted in an article for Buzzfeed:

He concluded with what appeared to be a resounding fuck you to the government and those people in the film world who have been supporting greater restrictions in film and those in society who favour a tightening of the screws:

“Now any freedom, any desire to find meaning, any desire to speak up disintegrates into hopeless gloom and darkness, which fills all the air around us and rules us. It seemed to us that somewhere — at the theater, in fashionable cafes, at home, with friends — there was still some free air…That’s it! Fuck! There’s no air!”
“It’s unfortunate we had to cancel this event. It’s really vile and gross to me. I never thought, to use the words of the classics, that I’d ‘fall into this shit.’ I call on all people, for whom still lives an understanding of honor and freedom, dignity and the right of an artist to create and speak freely, to unite and resist this darkness. With words, with art, in any way that helps.”
“And I hope that when all this shameful shit ends we, remembering it all, will laugh at ourselves and write the truth about this petty little time. Experienced people tell me that because of our cowardice and laziness, this shit will never end.”

It seems that the Russian culture wars that Natalia Antonova hoped would end are unlikely to go away. Even though, it is very true that in Russia liberals tend to let off a lot of steam, huff and haw, but show little backbone about really resisting the blows of the conservative onslaught. 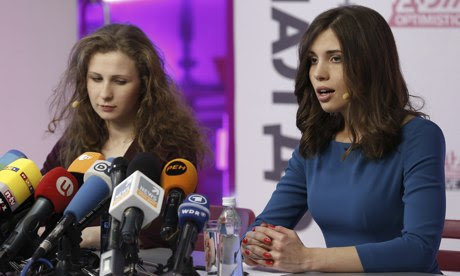 Regarding the story since the release of Pussy Riot, delusion has set in among some of their former supporters upon hearing of Nadezhda's Tolokonnikova's apparent support for the formerly jailed oligarch, Mikhail Khodorkosvky, who was released almost at the same time as the Pussy Riot duo. There have always been critical voices even among artists of a seemingly similar political background to the Pussy Riot collective. The artist Avdei Ter-Oganian has had a more critical view of their action (even though he himself left Russia following the reaction to his anti-clerical art). Today another artist, Anatoly Osmolovsky, has written an Open Letter to the Pussy Riot duo that while not critical of them, has "put them on their guard" about the mistakes that he thinks they are making. A detailed letter of five points arguing where they have gone wrong (from the fact of being unaware that the mass media spotlight is as much a jail as a real, physical jail; the mistake of attempting to abjure the action itself, even of refusing the Pussy Riot brand (simply because other greedy capitalists will take it from them); he also warns them of taking up 'human rights activity' rather than continuing in the artistic sphere. He links this to the experience of 1968 in Western Europe where it was counter-cultural forces which won the day for re-founding Western European democracy. Believing that they need a more anarchic strategy and that Russia is standing on the threshold of a 'carnivalistic transition', in short, a Russian 1968 is on its way, according to Osmolovsky who worked with his wife, Svetlana Baskova on the film For Marx. In this sense, Osmolovsky believes that Pussy Riot should play a more integral role in this coming carnivalistic revolution (rather than setting up another NGO).

So, Pussy Riot is already at the centre of another scandal and more arguments about its direction and use. It is still early to discover what the fallout (if any) of this more open attempt at censorship will be. Facebook and twitter are, alas, no indication of what will go on out of these spheres. Moreover as far as cinema is concerned, the silence about the other film Pussy versus Putin which has a much more inside look at the Pussy Riot actions as they took place is a shame for in a way its insights into the phenomenon of Pussy Riot is, in some ways, of more historical importance. What the story of Pussy Riot will look like in a number of years time is also, of course, an uncertainty given the tendency at least during the press conference of Tolokonnikova to half-abandon previous positions and even to try to take on a more explicit political role. Nonetheless, things are moving once again in uncertain directions.