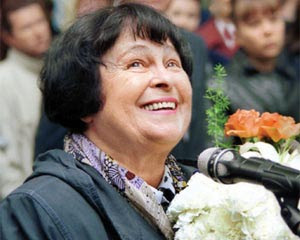 In a recent interview for Afisha magazine with the Russian film critic Anton Dolin, the Odessa film-maker Kira Muratova made some statements about her perspective on recent events in Ukraine as well as her view of Ukrainian cinema.

The recent Odessa International Film Festival was a fine chance to observe the atmosphere in Odessa as well as get an overview of recent Ukrainian films. A viewing of the national competition doesn't suggest that Ukrainian cinema has necessarily been revitalized and the words of Muratova below are surely right. There were too many films like Oleg Sanin's The Guide attempting to be blockbusters even though falling hopelessly in the credibility stakes. Other light romantic comedies (relating an unlikely love tryst between a venerologist and cosmonaut) such as Dmitry Tomashpolsky's and Alyona Demianenko's F63.9 Love's Malady also seemed to be a deliberate and rather cynical exercise in producing mass marketed trash. The only true sign of hope in the competition programme at Odessa was Vasily Vasyanovich's documentary-style Twilight. Of course, other Ukrainian films have been making waves, most notably Myroslav Slaboshpitskiy's The Tribe and Sergei Loznitsa's Maidan which was shown in the Ways to Freedom programme during the festival point to the fact that the competition doesn't reflect the real potential of Ukrainian cinema. Another name to look out for in the near future is that of Maryna Vroda. Victoria Trofimenko's film Brothers: A Final Confession entered in the main competition of the Moscow Film Festival also seemed more impressive than many of those shown at Odessa. British film critic Neil Young got it about right when he tweeted at Odessa (and made a related point to that by Muratova in the extract of her interview below):

The showing of Loznitsa's Maidan at the Odessa Film Festival was to include Kira Muratova as one of the audience. In many ways the showings (one in the morning and one in the evening) were extraordinary given the reaction of the audience. The vast majority of the hall stood twice during the film during scenes of the national anthem being played at the Maidan (though Kira Muratova herself didn't join in at this moment of unrestrained pathos), even though during the Q&A session Loznitsa was mercilessly criticised for not showing the Maidan that the public wanted. I think Muratova's measured words during the interview are an interesting contribution which merit a post. In the early moments of the escalation of the conflict between Russia and Ukraine over the Crimea, Kira Muratova was one of the signatories of an appeal calling upon their Russian colleagues to prevent the blackening of the original impulse behind the Maidan. A large number of their Russian colleagues did reply (although many others signed a declaration of support for Putin). Now Kira Muratova's reflections on Maidan and the tragic turn that events have taken suggest a sobriety of judgement that is sorely needed. In the interview she also talks of many other themes including her film Asthenic Syndome (shown at the Langeron Steps on the final day of the festival), Soviet censorship and for her affection for the cinema of Hanneke as well as her disenchantment with film festivals.

Here in any case are small extracts from her interview which can be found in Russian here: http://vozduh.afisha.ru/cinema/kira-muratova-ya-vyshla-na-finishnuyu-pryamuyu-ponyatno/


There seems to be a general feeling that a large of number of people from the creative professions that the events taking place in Ukraine have become a kind of impulse to create something new. Has this been the case with you?

- No, for me it hasn’t been so. I was wildly in favour of Maidan until the moment when the shootings and killings began. Originally there was something poetic about the events. There were, of course, all kinds of people there: undesirables and rabble but there were also many idealists. Then either they despaired, or began to hate, or were simply starved out…but they were idealists and dreamed of realizing their ideas. They believed in a wonderful future which they were bringing to realization in the present in a bloodless way. Then like in every revolution, Maidan started to swing in another direction. Very possibly they were pulled and pushed in that direction. But then the killings began. Before we killed other animals and now we are killing each other. I can find no justification for this. No territory- be it called a motherland- is worth killing each other for. I am a pacifist. This is not so much my position, it is more of a biological emotion.

I continue out of a kind of inertia to empathize with Ukrainians, I continue through inertia to condemn Putin but the fact that people are killing each other shatters me. Therefore I simply have not felt any creative impulse whatsoever. There simply can not be any. I can give an example from my own life. Once a tragic event occurred in my life. My young child died. After that I was in such a condition that I simply could not appreciate poetry, music, any form of art. It all felt abhorrent, all felt false. Some kind of neurosis- it continued for quite some time and then I got over it. Now I feel something similar. It’s abhorrent to me when people are killing each other. Whether Ukraine will become part of Europe or not is of no interest to me. At that price nothing is interesting anymore.

Are you making a new film after “Eternal Homecoming?”

As a matter of fact I believe I will no longer shoot films. More for my own personal reasons than for any political ones. I am no longer in good health and I can’t devote myself in the same way to this kind of work in these conditions. I love this profession but it is extremely hard physical labour… this subject has now become closed for me, especially after Melody for a Barrel Organ which we shot at night in the winter with child actors. This was devastating for my health so I had already decided at that time not to film anymore.

Is there, in your opinion, a future for Ukrainian cinema?
Only if people get used to the fact that things must be done cheaply. Some people manage to make masterpieces on the cheap. It’s all a question of improvisation and imagination. This is necessary for Ukraine and not to be copying Hollywood all the time. They all want to be making blockbusters. Necessity is the mother of invention. And one should be learning from everyone, from Dovzhenko and from the Americans.
Posted by giuvivrussianfilm at 08:47