10 Reasons Why Moscow's DOKer Should Become a Major Venue On the Global Documentary Film Circuit. 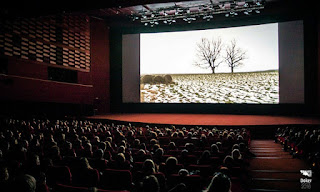 Between May 19th and May 24th the DOKer International Documentary Film Festival took place at Moscow's central October cinema. It marked the festival's second edition. This festival (and its accompanying all-year round DOKer Project) must now be seem as the main venue for international documentary film in Russia. Complementing the Russian-centred (ArtDocFest) or the niche documentary festivals (Flahertiana), the fact that Russia has a fully-fledged and independent documentary film festival is one of the most positive moments for film in Russia in 2016. Here are ten reasons why it can become firstly a major feature in Russian festivals and secondly a significant film festival on the global documentary film circuit.

1)      This is a film festival genuinely independent in conception and realization. While festivals of this kind should be funded, DOKer received not a penny from government funds. It has arisen purely from the efforts of its own team entirely and has managed to establish what is surely about to become an important fixture on the international documentary scene. Having in two years established its own reputation as the major international documentary film festival in Russia, developing in what are rather abnormal and schizoid times, a significant ‘mainstream’ festival with the capability of attracting very high quality documentaries from every continent.

2)      It is a festival which has already attracted quite a significant public thirsty for discussion about documentaries and about the ‘real issues’ that they often provoke. For a new film festival (in its second edition) to fill what is probably the largest cinema screen in Moscow for its opening and closing ceremonies is extraordinary. For it to do so for a film festival of documentary film is unprecedented.

3)      The Q&A sessions for the public with filmmakers who attend the festival (and especially the screenings of the parallel DOKer Project) are not just` 10 minutes tacked on at the end but very often occasions for real dialogue. Filmmakers – both Russian and (during the festival) those coming from abroad - can expect an audience which is intelligent and searching. An audience comprising of people who are not passive consumers of films but who, after watching quality documentary film, can and do become active proselytizers of documentary cinema. (the groundwork done by the DOKer Project since 2011 has meant that this community has already been formed).

4)      The DOKer team does not suffer from any individual's attempt to mark it off as their festival. That is, DOKer is without the autocratic paternalism of Nikita Mikhalkov and 'his' Moscow International Film Festival nor does it embody the more liberal (but still rather patriarchal) protagonism of Vitaly Mansky and 'his' ArtDoKFest. It is a genuinely democratic festival in its ethos and organisation. It is also an apolitical festival in the better sense of the word for one that aims to be a mainstream festival (it doesn't censure 'controversial' films nor does it actively attempt to impose any protagonist-like position). It tries in very trying and complex circumstances to build up a 'normal' international festival. During the first DOKer festival last year it was willing to demonstrate its civic courage by publicly showing on its screens a message of solidarity for imprisoned filmmaker, Oleg Sentsov and also screened a film by Alyona Polunina attempting to deal with the Ukraine conflict from the viewpoint of its documentary heroine, a liberal 'intelligent' who decided to travel to Ukraine to meet the 'Maidaners'. The film screening of Varya proved to be its only public screening in Russia given that the Ministry of Culture subsequently decided to refuse it a licence and so effectively censor it. The screening at the festival led on to a very impassioned Q&A. proving that the festival was capable of becoming a forum for sharp issues brought on by its films.

5)      For those who recall the debates over the lack of recognition for women in the filmindustry sparked by Jane Campion’s remarks about the inherent sexism offestivals such as Cannes, DOKer is a project and a festival whose main directors women and permanent staff (in fact Russian documentary film is very much a sphere in which women predominate). DOKer just happens to be this way, that is, it is not a woman’s film festival but a festival in which gender equality is finally more of a reality than just a goal. Another reason why it sets itself apart from other festivals in Russia like those mentioned above.

6)      While the festival was run and organized by volunteers (given funding realities) this was a highly professional festival. To give just one example not usually mentioned when talking about film festivals the 36 films that required translation were done both voluntarily but also showed an exceptional level of professionalism. Like much in this festival although the work was truly Herculean there .

7)      As the winner of the Grand Prix, Carlos Mignon, noted one of the main themes of the competition was that of inter-cultural communication and the festival itself was a fine example of this cross-cultural communication. In this way DOKer can be seen as a much more contemporary international festival than the main Moscow International Film Festival precisely because here one senses a real sense of the potential for a cross-fertilisation of ideas and styles that is not always so obvious in Moscow’s showcase festival. Obviously the scale of DOKer is much smaller but its spirit is already much more international.

8)      The reputation of DOKer among Russian documentary film festivals surely has potential of gaining predominance precisely because it pretends to showcase documentary as such and not just documentaries on Russian themes or in the Russian languages (such as Art Doc Fest does), nor just a specific type of documentary (such as the observational documentary as does Perm’s Flahertiana). These two are both excellent documentary film festivals and have a very significant role to play but DOKer in a mere two years has gained definite advantages over them for being the main documentary festival in Russia. All DOKer films are projected with both English and Russian subtitles (if they are not in those languages) and by so doing this alone it has meant that it has set its sights on being the only truly International festival of documentary film in Russia. Moreover, by avoiding the niche territory (nonetheless, it has also managed to captured one niche field by being the only festival in the world with a special programme devoted to IT documentaries) it also lays a claim to becoming a mainstream international festival of documentary film.

9)      DOKer has made a special effort in inviting excellent teams of jurors to judge its films in competition. If last year they managed to attract one of the greatest documentarists of our times Viktor Kossakovsky, this year they attracted a very wide range of globally renowned and highly-professional figures from all sectors of the film world (editors, producers, distributors, directors, screenwriters, critics as well as film programmers).  So this year juries comprised of people like Mike Lerner (a previous award- winner at the Moscow International Film Festival documentary competition), Sara Fgaier (probably Italy’s most promising film editor), Pirjo Honkasalo (an award winner of three awards at the Venice Film festival for her ‘The Three Rooms of Melancholia’) as well as industry and all-round figures or industry figures such as Giovanni Robbiano (a member of the European Film Academy) or Alexandra Derewienko and programmers like Dorota Lech (who programmes films for Toronto and Hot Docs). This plus some impressive figures from the Russian film world – Georgy Molodtsov (programmer at the Moscow IFF), Alyona Polunina ( a well-known documentary film-maker in Russia) and Mikhail Ratgauz (one of Russia’s most well-known independent journalist/ editors as well as film critic).

10)   And then there are, of course, the films. 1,700 submissions from 97 countries out of which 40 were selected. Films selected were practically all premieres  in Russia. These films certainly demonstrate that DOKer is already well-established on the international circuit of documentary film (they included many Russian premieres of films that has fared well at some of the most well-known documentary festivals – IDFA or Hot Docs etc. Many films were certainly world class documentaries and the festival certainly had a very varied repertoire. So very fine aesthetic experiments such as Mark John Ostrowski’s Sixty Spanish Cigarettes would appear alongside other films which concentrsted on its deep psychologically-driven story such as Carlos Mignon’s intensely-ambitious film about the encounters and disencounters within a family. Equally, in the IT competition the film which won the main award (Dreams Rewired) was one that would delight ardent cinephiles the world over. The fact that Alexander Rastorguev’s latest film on Norilsk was presented at DOKer is also an indication that Russia’s most original documentary filmmakers take this film festival seriously. DOKer in a very short space of time has proved that it is worthy of a place in the global documentary film circuit and has shown in only its second edition that it is able to organize a full-scale documentary festival which does attract large while numbers of filmgoers even while foregoing any state support. There certainly exists the skills and competence among the DOKer team to make this an ever-growing feature (adding further fixtures as the festival progresses- this year a Master Class with Mike Lerner was one of the side events) with the confidence that this can one day belong to the Class A of documentary festivals. Now, of course, there is the long road to climb for the kind of funding and national and international recognition that it has proven to deserve.
Posted by giuvivrussianfilm at 12:03