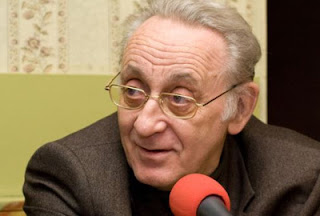 How can one write about Russian or Soviet film without mentioning the name of Naum Kleiman and remembering the days when the Cinema Museum (Musei Kino) had its own building near Krasnopresenskaya metro? The story of its closure (although it is running a small operation at the Central House of Artists) is, perhaps, one of the saddest indications of the sickening maneouvres by 'cultural' representatives of the 'national-patriotic' elite like Nikita Mikhalkov. (However, I do not intend to write a blog on the machinations of this rather unsavoury character: undoubtedly a talented director but a deeply unpleasant person when it comes to the story of the Cinema Museum and as well as his recent machinations at the Union of Cinematographers and clash with Marlen Khutsiev).

Musei Kino's director, Naum Kleiman, has been compared to Henri Langlois, the man at the head of Cinemateque Francaise for many years. In many ways justly. I remember spending sometimes six days a week at the Musei Kino and the four screens showed films from the entire history of world cinema. It was a film education greater than I could get anywhere else. I spent the first year watching all the world classics that I had not managed to see and then concentrated on Soviet cinema. I remember falling in love with Soviet film after a viewing of 'The Extraordinary of Mr West in the Land of the Bolsheviks'. Without Musei Kino I would have known nothing of Otar Ioseliani, Boris Barnet, Vasili Shukshin, Kira Muratova, Abram Room, Aleksandr Medvedkin, Marlen Khutsiev, Elem Klimov, Mikhail Kalatozov, FEKS... well, the list is endless. I would also have missed out on the Master Class of the Dardenne Brothers, Istvan Szabo, not have met Shavkat Abdusalamov and not have watched on a large screen the full opus of Fassbinder, Bertolucci, Godard or Bresson.

This building was truly a second home for me in Moscow and I still mourn its loss. Hopefully one day a new Cinema Museum will open and Naum Kleiman will be there to direct it. A vain hope? Let's hope not.

For those who read Russian here is the website address ( www.museikino.ru )dedicated to this most venerable of institutions. A rebuilt Cinema Museum with Naum Kleiman at its helm would signify that one could breathe more freely in contemporary Russia.
Posted by giuvivrussianfilm at 07:34