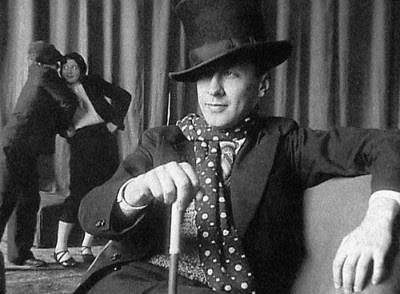 There is one name in Soviet cinema who is mentioned very rarely it seems even amongst Russian film scholars & it puzzles me as to why. That name is Sergei Yutkevich. As far as I know no monograph on his has been published in English and rare even is the academic article dedicated to this director. Perhaps one can only give one reason but surely this is an unsatisfactory reason- Yutkevich was politically orthodox and was mainly associated with Leniniana films (The Man with a Weapon, Lenin in Poland, Lenin in Paris etc). During a recent Symposium on Paradjanov, Ian Christie suggested that there was a rumour spread at one time that Yutkevich was a colonel in the KGB. A completely absurd rumour Balaian replied and, in fact, it was generally agreed by panelists of the Symposium that it was Yutkevich who saved Paradjanov's 'Sayat Nova' and was its fiercest defender. Yutkevich may have been politically orthodox but he was an aesthetic radical and, perhaps, one of the directors from the twenties who tried to stay truest to the 'formalist' roots of that period. I have only managed to see a small portion of his films but my recent viewings of his 'Mayakovsky Laughs' and 'Lenin in Paris' (not even his most well-known or best considered of films) have convinced me that this is a film director of whom more needs to be known and a major retrospective would be most welcome. His use of animation in Mayakovsky and even his eclecticism in the rather more conventional 'Lenin in Paris' (which nonetheless has echoes of Klimov's 'Sport, Sport, Sport' and even to my mind small glimpses of Paradjanov's 'Sayat Nova')are crying out for a rediscovery and arguably a whole new interpretation of this director.

The only recent article that seems to do him justice is in Russian published in the review Seans: for Russian speakers here is the link http://seance.ru/n/21-22/yubiley-sergey-yutkevich/yutkevich/ Perhaps the conclusion of the authors is the correct one - Yutkevich was that most unimaginable of creatures for the Western mind: A Soviet Dandy. A creature that would overturn all the myths that have been created about Soviet culture and one too difficult to square with the simple narrative that has been told about Soviet cinema during and even after the Cold War. A formalist who survived and whose least known film 'The Youth of our Country' was praised by Matisse as a masterpiece but has been completely buried & forgotten in any history of Soviet cinema. He also made an adaptation of Othello which won a Directors Prize and was nominated for the Palme D'or in the 1995 Cannes Film Festival. He was also awarded a Golden Lion for his career in the 1982 Venice Film Festival.

The drawing is a portrait of Yutkevich by Matisse.
Posted by giuvivrussianfilm at 09:01