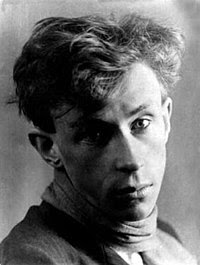 It is hard not to start a blog from Moscow not mentioning the recent explosions in the Moscow metro- it seems to colour everything one does for days after. Strangely enough on Monday morning the image of Lubianka was already in my mind. On Sunday I had been to a lecture by the filmmaker Andrei Khrzhanovsky on the actor Erast Garin. Garin was probably one of the greatest actors in the history of Soviet cinema and like Ilinsky was sometimes referred to as a 'Soviet Chaplin'. Like Illinsky, Garin was an actor who had been trained by Vsevolod Meyerhold. Garin was probably the most devoted of all Meyerhold's actors and even when he had left Meyerhold he would never work under any other theatre director. Khrzhanovsky recalled how in the last years of his life Garin would constantly ask people 'Tell me, why they did kill the old man (starik)'?. As Khrzhanovsky stated it is impossible to read Meyerhold's written testament of his beatings in the Lubianka without tears swelling up in your eyes(and Garin was probably fortunate not to have lived to have read them himself).

Khrzhanovsky in his talk gave a picture of Garin the man - a man who while very tacitrun was also extremely brave. He was one of the only friends of Erdmann to risk making a visit to the exiled writer in the Enisei (leaving after fourty minutes because he saw that Erdman had a pen and paper at his desk and did not wish to bother him) as well as being the first to dedicate a theatrical production to the name of Meyerhold in the early Thaw. During Khrzhanovsky's talk some clips of films were shown (from 'Poruchik Kizhe' and from Cain XVII - a political satire based on the script of Evgenii Shvarts and Nikolai Erdman) as well as hearing a recording of the voice of Garin reciting a piece from Erdman's 'Mandat' (The Warrant).

Khrzhanovsky was also in the news this week after winning the main NIKA prize for best film (the film received also prizes for best director and best script). An excellent choice as far as I'm concerned- Khrzhanovsky's film should be considered one of the very best films to come from Russia in recent years. It will be premiered in the UK in early May & Andrei Khrzhanovsky will be coming to present the film.

There is plenty to write about as far as cinematic events are concerned. A retrospective of Chekhov adaptations is showing at Illusion cinema and a festival of films linked with three generations of the German family (Yuri, Alexei and Alexei Junior) is showing at the Eisenstein Library with introductions to the films by film scholars as well as by actors and a master class by Alexei German himself.

The concentration of state funding to five large producers threatens, according to some commentators and directors like Konstantin Lopushansky, the existence of art house cinema in Russia and is arguably another sign of the ill-effects of the dominant 'Mikhalkovshchina' paradigm. Meanwhile Nikita Mikhalkov is involved in a new scandal over his sequel to 'Burnt by the Sun' set in World War Two. His poster has been the object of some hilarious 'photozhaby' (creative 'photoshopping') on the internet in which Mikhalkov appears not in the most heroic of lights. He seems to have taken this rather too personally and is reported to be taking these 'wisecrackers' to court. This year marks the 85th birthday of his rival for the post of head of the Cinematographers Union, Marlen Khutsiev and Illusion will be showing his excellent 'July Rain' later this month. Finally, a possible sign of a mini thaw is evident in the decision of the TV channel, Kultura, to finally show Andrej Wajda's 'Katyn'. However, this was tempered by the news that after the film a discussion will be arranged with the overwhelming (overbearing?) presence of who else but the principal 'national patriot' after God, Gospodin Mikhalkov himself. Plus ca change...

Here are links to the latest Mikhalkov scandal as well as a link where you can still see the Photoshopping work that Artem Lebedev has done to the original film poster:
http://officialrussia.com/?p=18581
http://tema.livejournal.com/602247.html
Posted by giuvivrussianfilm at 00:05