Some Film Venues in Moscow 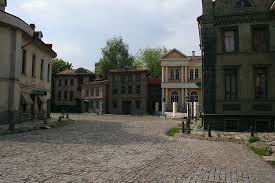 Coming back from my ten week stay in Russia I am beginning to reflect on the ways that the historical memory of Soviet film culture is being kept alive in some form or other. This is a painful subject in many ways. The gutless sale of the Cinema Museum by the Filmmakers Union a few years ago was the single biggest blow to any project of keeping alive the historical memory of Russian and Soviet film culture. I wrote about this place in a former post of mine: http://giuvivrussianfilm.blogspot.com/2009/11/musei-kino.html and won't repeat my words here. For those who may be interested in the occasional activities that it carries on at a variety of venues may go to their website : http://www.museikino.ru/announce/ Most recently it has been showing an excellent retrospective of Czech films from various historical periods.

Much of the Cinema Museum's hundreds of thousands of exhibits have been stored at the Mosfilm Studios (pictured above). Their site in English is http://eng.mosfilm.ru/ Twice a week it is possible to turn up for an excursion round their site, although few of the Cinema Museum's store of exhibits are available on public view. A tour is given in which many of the motor cars, the sets and the props, makeups and decorations as well as the Old Moscow set that was specifically built for a film by the present Mosfilm director, Karen Shakhnazarov are on view. The excursion, however, gives only a rather superficial look at the 'attractions' of the Studio and is not a serious exploration of the history of the Studios. It would be nice if the Mosfilm Studios would take a more active role in explaining its own fascinating history.

With the disappearance of the Cinema Museum, they are only one or two cinemas that will show old soviet films. Perhaps the most established one is the Iluzion cinema which, however, caters mainly to older and more populist tastes and rarely shows films that have true aesthetic brilliance. In the past two months there was only the odd film that really made a trip to this cinema worthwhile (a showing of Khutsiev's 'July Rain' was the only film standing out in recent showings) with the exception of its films dedicated to the Chekhov film adaptation season that it ran in honour of the recent 150 anniversary celebrations of this classic author. Nonetheless, there is sometimes a rare treat and it is after all the only cinema left of its kind. One other cinema in the centre of Moscow, the Khudozhestveni cinema near the Arbat, does have a weekly showing of old Soviet documentaries normally followed by an audience discussion with the presenter. Also in some of its smaller halls it does occasionally show some Russian and Soviet as well as foreign classics. In one day I managed to watch Bauer's 'Twilight of a Woman's Soul' and Murnau's 'Tabou', though both, alas, were DVD projections and not from 35mm copies.

A more recent venue has sprung in the guise of the Eisenstein Library in Karetny Riad. If one forgives the fact that it, too, shows its films from DVD projections it has some excellent retrospectives. I missed the earlier Chekhov film festival and also the more recent films dedicated to filmmakers born in the year 1945 from Abdrashitov to Fassbiner but saw many of the films of its excellent retrospective of films related to the three German generations which I commented on earlier http://giuvivrussianfilm.blogspot.com/2010/04/three-generations-of-german.html The presence of actors such as Batalov and Filipenko, directors like the Germans, Abdrashitov and Bobrova as well as many cinema scholars introducing the films themselves make this an excellent venue for those who may want to learn more about Russian cinematic history. The site address is http://www.eisenstein.ru/

Another place which has tried to keep alive the historical memory of Russian film is, interestingly, the Meyerhold Museum. An excellent series of lectures and film showings have tried to show the impact that the great theatre director, Vsevolod Meyerhold had on Soviet film. Many film actors begun their careers under Meyerhold and even many directors had very strong links to this cultural giant. The debt that Eisenstein had to him was always acknowledged and impossible to underestimate but the story of Meyerhold and cinema is one that would fill volumes. The site of the Museum in English is available here http://www.meyerhold.org/

One other venue of some interest for cultural lectures is the recently opened Garazh Centre of Contemporary Culture. Lectures there are very regular and on many different subjects relating in some way to culture. Talks on architecture, Soviet fashion and the flappers of the 1920s as well as an excellent talk on the crisis by one of Russia's foremost independent Marxist thinker, Boris Kagarlitsky, were the three events that I managed to attend after having only belatedly found out about the lecture series in this new museum space.

These are a few of the venues which attempt to keep the flame of cultural historical memory alive in Moscow. Not enough given the huge hole that the loss of the Cinema Museum's Krasnopresnenskaya venue has caused. Yet along with the presence of Russia's television Kultura channel these are some of the few places where the looming twin shadows of commercialised pap and Mikhalkovian kitsch don't loom too large and where something, however minor, seems to be pulled from the wreckage that commercialisation and 'patriotisation' is causing.

As far as St Petersburg is concerned I have little knowledge. However, the recent attempt to set up a new festival under the guidance of Alexei German Senior seems to bode well.
Posted by giuvivrussianfilm at 12:07