Khrzhanovsky's 'A Room and a Half' in the UK 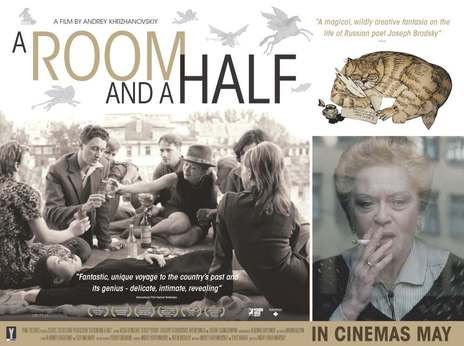 There have been two short reviews in the Guardian by Peter Bradshaw and in the Observer by Philip French of 'A room and a half' in connection with the excellent news that the film is coming to UK screens. The Philip French review can be quoted in full (as it is a very small review):

This touching and amusing movie is a biography, both imaginative and imaginary, of Joseph Brodsky (1940-1996), the self-taught poet, critic and translator, raised in Leningrad, the son of a Soviet naval photographer, and persecuted by the state for his independence of mind. In 1972 he was driven into American exile where he achieved intellectual eminence, and he received the Nobel Prize for literature in 1987. Brodsky never returned to Russia and apparently once said that "such a journey could only take place anonymously". Khrzhanovsky takes Brodsky on a journey back to Leningrad, dreaming about his youth, upbringing and early life as he takes the ferry from Helsinki to Leningrad before being reunited with his elderly parents. The director uses animated sequences to elegant effect, and his affectionate, nostalgic movie brings to mind the autobiographical works of those other exiles, Vladimir Nabokov and Andrei Tarkovsky.

This hardly gives a full picture of the brilliance of this film. I added my commentary to the review which I reproduce here:

This is a truly wonderful film and it really deserves immense praise. The way that Andrey Khrzhanovsky handles the mixture of animated, narrative, quasi-documentary footage is superb. I watched the film over a year ago in Moscow and was immediatley captivated by it and have since watched it on DVD- it is the kind of film that can only improve after each viewing because there is so much in the film.
Yursky and Friendlikh (Brodsky's parents in the film) are two of Russia's most superb actors. Khrzhanovsky is undoubtedly one of the most splendid animated film directors not just in Russia but in world cinema and the animated sequences are absolutely splendid.

This is a portrait of Brodsky which doesn't set him up on a pedestal as some sort of martyred genius. Moreover there are no idle speculations on the Jewish theme. No, instead this is one of the best films about the sense of time and exile available. Khrzhanovsky uses an assortment of filmic devices but in such a way that one feels that nothing is forced.

Alas, when I saw the film it was being put on at only one cinema in central Moscow and even after being awarded three Nikas (the major Russian film awards) this spring, it still is only being repeated in one cinema (the same one that showed the film last year). A real shame- Russia showers the mediocre likes of Mikhalkov, Khotinenko and Fedor Bondarchuk with millions to film trash and ignores the fact that real contemporary geniuses live in its midst.

A few points about the short reviews by Philip French and Peter Bradshaw: saying that Yursky has the look of a Pasternak is a rather comical overexaggeration - I read this to a Russian and they burst out laughing (Pasternak had such a striking and unique appearance that it is an exaggeration to compare just about anyone to him) and while, in this respect, the Tarkovsky and Nabokov comaprisons by French may not be quite so far out, I still don't think they are not necessarily the best references to make for this film. This film reflects a polystylism that is, arguably, closer in some ways to Paradjanov than to Tarkovsky (although again Paradjanov wouldn't be the major reference to make)- I think, if one were to search influences on the style of Khrzhanovsky the barely known film Cain XVIII may be said to have a large but indirect influence on Khrzhanovsky. It would be wonderful if the BFI could put on a retrospective of Khrzhanovsky's animated films- then we would know that Khrzhanovsky is not someone who can be compared to others but that he is a truly great master - maybe one day we'll be talking about him in the same breath as we talk about Fellini (by the way his animated film 'Long Voyage' based on Fellini's is superb).

Alas, newspaper reviewers are very rarely great conoisseurs of Russian film and the attempt to compare new Russian films constantly with Tarkovsky is something that gets carried to the point of absurdity. Nonetheless, thanks for small mercies (I suppose) that the film was actually reviewed at all.
Posted by giuvivrussianfilm at 01:45