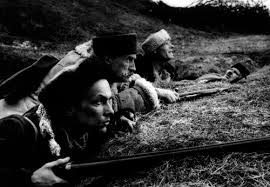 Today it was announced that the scriptwriter Eduard Volodarsky has died - the author of some of the most significant films of recent times including many of Alexei German's classic masterpieces as well as a number of films by Nikita Mikhalkov. He was also the author of a television series filmed by Sergei Ursuliak based on Vassily Grossman's great novel about the 'Great Patriotic War' (as it is known in Russia and much of the former Soviet space) Жизнь и Судьба (Life and Fate). Scriptwriters are all too often ignored although ironically in the Stalin period it was more often they (and not the directors) who were held to account for a 'harmful' (or politically incorrect) film. It is probable that the greatest of post-Soviet screenwriters were two who tragically could not fulfill their full potential because of their early deaths: Pyotr Lutsik & Aleksei Samoryadov who died within less than a decade of each other (Samoryadov in 1994 and Lutsik in 2000).

Surely one of the greatest films of the 1990s was, in retrospect, the Lutsik directed Окраина (The Outskirts, 1998) which resurrected the Soviet film in the Post-Soviet era both defying and superseding an epoch of retreat and horror of sovok. In Lutsik’s film, the Soviet film was back as allusion and model with a thunderous revenge just like the revenge on Moscow from the outskirts wreaked in the film. Reading back on interviews of the time this film was to be one of those films which had a very frosty reception given how it had broken some sacred cows of the epoch: there were even some calls for the film to be banned for its supposed incitement to violence by those who had lost everything (and above all their land) during the Yeltsin wild nineties. Reading the comments of some well respected critics including, for example, those of Lev Anninsky, Miron Chernenko or Tatiana Moskvina, one understands that few critics at the time were able to discover original and dispassionate ways of reading the film.

The scripts of Lutsik and Samoryadov betrayed a rejection of the psychological realism predominant in late Soviet times but not by the path favoured by most in the 1990s (by immersion into the post-modern worlds of chernuka , glamour or imperial fantasies) preferring rather a return to the epic films of the 1930s and 1940s even if epos was mixed with styob. This post-Soviet return to the style if not quite the substance of Socialist Realist classics (as well as choosing a politically incorrect subject line for the reactionary 1990s with its imperial fantasies and exaltation of capitalist glamour) was an incredibly risque' one.  While Lutsik’s Outskirts copied the title of a film by Barnet of the early 1930s it was perhaps the mythical Чапаев (Chapayev, 1934) that is alluded to most in Lutsik’s film (but then the film is so full of allusions that one feels that it is a kind of declaration of love for the Mythological period of Socialist Realism. Yet at the same time, as the critic Elena Gracheva has argued, it also recalls the bylina tales about Ilya Muromets and Mikula Selyaninovich and thus the mythos of the film is much more deeply rooted in Russian culture than many critics had argued.

This epic which combined the search for social justice, the road movie and a typical Russian бунт (revolt) with the idea of the periphery wreaking its, at times sadistic, revenge on an indifferent oligarchic elite and on the centre (here Moscow) as well as on those who served this elite was read as a manifesto. Perhaps both rightly and wrongly. In many ways it was a manifesto but just as much a cinematographic as a social or political manifesto and, in some ways, a manifesto still yet to be heeded. It has had few followers and even in the following decade and a half there are few films that can be said to have been influenced by it. Thankfully there have been signs of a Russian New Wave, (even if these signs have been weaker than one would have hoped) but it still seems that too many have continued to film as in the nineties as though Lutsik and Samoryadov's film never happened. Their attention to a powerful cinematographic tradition went unheeded and shows us simply one of the directions towards which post-Soviet Russian cinema could have developed but didn't manage to do so. However, as the writer and critic Dmitry Bykov pointed out at one point, the various film scripts of Lutsik and Samoryadov, perhaps, still have yet to find their epoch. They were, it could be argued, too far ahead in their nostalgia. Perhaps as Chris Marker indicated in his film on Medvedkin it'll be a new generation that will have such an affection for the Soviet dinosaurs.