Two Films of Mikhail Bogin - One of Russia's Poetic Realists. 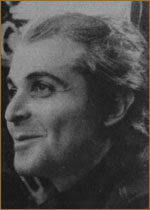 The fact that each generation of Soviet filmmakers contained a broad constellation of directors whose names are far too many to mention (or even to remember) is true not only of the truly revolutionary 1920s (and my recent post on Chervyakov mentioned just one of the hidden greats still to be fully rediscovered) but also of other decades. The directors who worked in the late Thaw/ early Stagnation period is certainly no exception. Of course, all will know of Tarkovsky and Paradjanov and many of the readers of this blog will know of Muratova, Klimov, Shepitko, Danelija, Askoldov and maybe Panfilov, some others may know or have heard of Alov and Naumov, Gaidai, Motyl, Ozerov, Bondarchuk, Rostotsky, Khamraev, Averbakh etc. Yet there are also other names in Soviet film of this period- among them are the makers of only two or three films, and also among them are a number who later were to become emigre filmmakers- leaving either for Israel, the United States or some other country . Mikhail Kalik may be the most well known of these filmmakers but there was another filmmaker two of whose Soviet-era films were shown tonight at what is now the main location for a reborn Museum of Cinema in Moscow, the Mossovet- this filmmaker is Mikhail Bogin.

The two films on show tonight introduced both by the director himself as well as by the director of the Cinema Museum, Naum Kleiman - were his short 1965 film Двое (The two, but also known as The Ballad of Love ) as well as his later 1971 film О любви (About Love). Unfortunately only the first film was viewable- the quality of the DVD projection of the second film was so bad as to impair any genuine aesthetic reception of the film - even if the atmosphere and tone of the film was so powerful that at least this one aspect was transmitted very well. Nonetheless, in spite of this, what seemed clear was that here was another candidate for reappraisal and rediscovery. The first film Двое was well noted at the time - it in fact won one of the two FIPRESCI prizes at the Moscow International Film Festival and the New York Times review in early 1966 was extremely fulsome in its praise. The critic Howard Thompson wrote about the film the following:-

See "A Ballad of Love," whatever you do. It was made at the Riga Studios in Latvia, under a young director of uncommon skill and insight named Mikhail Bogin, who wrote the screenplay with Yuri Chulyukin. Ever so simply and sweetly, minus one drop of saccharine, the picture conveys the growing love of the spirited oboist and the beautiful girl in her silent world who studies at a pantomime theater for deaf mutes.
"What is music like?" she scribbles. There is a moment of freezing beauty with the boy watching the girl as the balcony scene from Romeo and Juliet is pantomimed on the stage. The picture is most effective when the sound track goes silent, as at the climax when the deaf girl attends a concert.
The film clips off abruptly. If only it could have gone on and on.


And yes there is much to say about this short film and its strange melodramatic tale of love between the two main characters of the film. Naum Kleiman was surely right to connect Bogin's place in Soviet cinema to the trend of Poetic Realism which has Boris Barnet at its centre. And this film surely signalled something of a unique experiment with its discourse between the worlds of silence and noise. Bogin's next film, although as I stated shown in a truly deplorable condition, was equally entrancing. The same actress- Viktoria Fyodorova - who died recently and whose incredibly tragic destiny is known to many Russians and Americans (a daughter of a famous Stalin era actress who was born to an American diplomatic attache' and who, like the director, emigrated later to the US) - managed to create in both films an atmosphere which mixed a melodramatic love story with a melancholic poignancy that seemed so deeply imbued with some difficult to pinpoint late thaw mood- a particular doleful note  that can almost be dated to the late 60s and 1970s (present, for example, in Shepitko's Крылья [Wings] of 1966).

These two films by Bogin seem to show how, like the great Barnet himself, he was a great actors director - the second film certainly proves how he was to work with many actors who would only later be known as great actors. They also point to how the existence of a Russian Poetic Realism is a subject still yet to be fully explored by film scholars.