An update on Naum Kleiman and the Cinema Museum: Reasons for Pessimism. 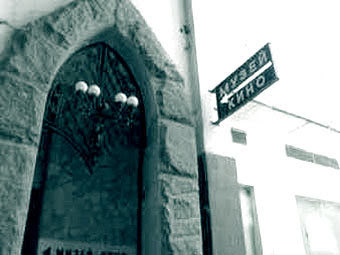 Further to my previous post regarding the refusal of the Ministry of Culture to prolong Naum Kleiman's contract as director of the Cinema Museum a few things have moved. The open letter  translated in my previous post led to an apparent demarche on the part of the Culture Ministry who first denied that Naum Kleiman would be sacked and then was informed that his contract was being prolonged by a year. Also there was a promise to seriously start work on finding a permanent building for the Cinema Museum in both Moscow and St Petersburg. Some of the Russian cinematic community seemed to greet this with joy. Yet looking at things more soberly there seems much less to rejoice about than at first sight.

The idea that Naum Kleiman's contract has been prolonged for a year (and not longer) seems an utter insult. It only confirms that the Ministry of Culture do want him to be rid of him and that they seem to be happy to play a waiting game. Promises of seriously 'looking into' the idea of a new building for the Cinema Museum were made a decade ago when international names like Quentin Tarantino, Bernardo Bertolucci, the brothers Dardenne publicly supported the call to keep the museum open. The German Chancellor of the time Gerhard Schroeder was supposed to have even brought up this with Putin. The Cinema Museum was not saved and no serious projects to build a new Cinema Museum have ever been allowed to get off the ground. The criminal raider-like theft of the old building near Krasnopresnenskaya went ahead and Naum Kleiman and his cinema museum was left roaming from one small cinema hall to another in the peripheries of Moscow over the past decade. There seems little real hope that a government willing to destroy its Academy of Sciences is half-interested in preserving its own radical cinematic history, little hope that a government insistent on force-feeding its population an ideological diet of religious nationalism is willing to genuinely allow and foster the return of a centre where revolutionary visions - often atheist and anarchist visions but nearly always transgressive visions- of global cinematic excellence can be readily available.

Another important moment of yesterday's agreement was the nomination of Konstantin Ernst as head of the Supervisory Council of the Cinema Museum. The General Director of Russia's First television Channel and producer of many rather tasteless films in the last decade and a half, there seems little encouraging in this fact either. The signature of Konstantin Ernst (along with that of Fedor Bondarchuk) looked rather incongruous in the open letter in defence of Naum Kleiman, but the fact that Ernst has wangled himself into a position of great importance bodes rather ill. The logic, I suppose, is that unless one can get people like this on your side there would be no hope for the Museum idea to be revived. And yet along with the prolonging of only one year of Naum Kleiman's contract and the manouevring of a person close to power into a position of great importance in this structure could soon prove to become the worst of all possible worlds.

What shouldn't be forgotten is that the Museum of Cinema also holds priceless exhibits often donated to the Cinema Museum precisely because Naum Kleiman was director and could be fully trusted. For this reason alone the Cinema Museum should be fully under the control of Kleiman and people who he personally nominates not for a further year but for perpetuity. This issue hasn't been broached at all in the past day or two and yet given the raider-like grab of the Cinema Museum building eight years old and the absolute inertia of the past decade, deep pessimism over this issue often proves to be the most realistic outlook.

As for the euphoria of today amongst the cinematic community in Russia I remember how in late 2005 a picket outside Dom Kino was staged in the hope of a last minute reprieve for the Cinema Museum. Up popped an actor-politician by the name of Yevgeni Gerasimov (a member of the Moscow Duma for United Russia) telling the demonstrators that everything was fine, the Museum of Cinema had been saved. A wave of euphoria seized the crowd. It wasn't to last very long- by the evening it was discovered that he had simply uttered a bare-faced lie - the cinema museum had instead been doomed.

As the film critic Anton Dolin in an excellent post for gazeta.ru today stated:

"We, already without a cinemateque for a decade, are now rejoicing that the Minister of Culture has made such a fine agreement with our Langlois (the mythical director of Paris's Cinemateque who Kleiman has often been compared to), and no one is going to be sacked- at least, not yet, and the Museum will certainly exist. Sooner or later it will be built! Like in the old Soviet joke about a swimming pool in a lunatic asylum: we are diving so well that they've promised to add the water soon."

It seems that until the asylum's walls are broken down the promises are there to be broken. As for swimming pools we all know what happened to Moscow's finest open-air one.
Posted by giuvivrussianfilm at 12:18