The Moscow International Film Festival : a short history and some notes on its 34th edition. 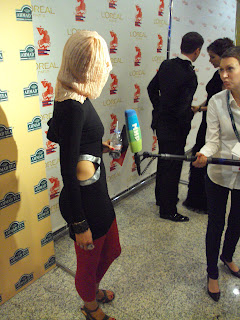 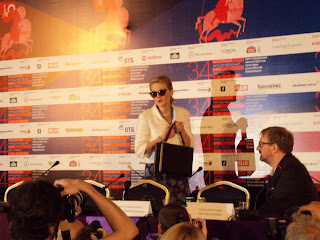 Trying to compare the Moscow International Film Festival (Russia's biggest and, so far, most significant festival) to other international film festivals is a rather hopeless task. It is not a Class A festival of the likes of Cannes or Venezia or even Berlin and yet it is Russia's major international film festival which, nevertheless, does attract international names to its orbit. It has a chequered history in its choice of main prizes but got things spectacularly right in 1963 when it chose Fellini's 81/2 much to the chagrin of the Soviet Union's cultural bureaucrats. Other significant films to be awarded main prizes that have stood the test of history were Kaneto Shindo's The Naked Island (1961), Kurosawa's Dersu Uzala (1975) and Klimov's Come and See (1985). Humberto Solas's first feature film Lucia was also awarded main prize at the festival in 1969. Otherwise awards have often gone to less outstanding films by a mix of already well-established directors who either entered films far from their best (for example, Juan Antonio Bardem) or good but not great directors (Krzysztof Zanussi or Zoltan Fabri) or, like this year, to completely novice directors (Tinge Krishnan). The choice of Russian or Soviet winners has veered towards the conservative - Bondarchuk and Gerasimov - or to those who have not become known internationally (in recent years Uchitel, Dostal, Storozheva and Meskiev). Italian directors have won a number of times- as well as Fellini already mentioned (he won twice), Ettore Scola, Maurizio Nicchetti, Pietro Germi, Damiano Damiani and Francesco Rosi have all been recipients of the main award in the history of the festival. The Taviani brothers were to even win it for a TV film adaptation of Tolstoy's 'Resurrection' in 2002- a clamorous mistake given that Kira Muratova's «Че́ховские моти́вы» (Chekhov Motifs) was also in competiton in the same year. Muratova's «Мелодия для шарманки» (Melody for a Barrel Organ) also failed to win the main award three years back beaten by Nikolai Dostal's much less impressive Петя по дороге в Царствие Небесное (Pete on the way to heaven).  The string of Russian victors in the mid noughties (from 2004-2009 four out of six of the victors of the main award were Russians) has, it seems, come to an end even though this does not necessarily signify any necessary break from a growing autarky of the Russian cinematic world.

Culture has been one of the major battle grounds in recent schisms in Russian society and few events have had more national and international resonance than the Pussy Riot affair. The undoubtedly courageous step by director and actress Olga Darfi to turn up to the opening ceremony of the Moscow International Film Festival dressed in, as she put it, a summer Pussy Riot costume was one of the small scandals that surrounded the festival (see photo above). Another scandal surrounded the anonymous 'open letter' of 61 young cinematographers who in almost Stalinist-era cliches called for an end to catering to the tastes of European 'necrofagists' and for more positive films. This was, of course, music to the ears of those around Mikhalkov and Govorukhin and the groups of those who want to claim film for the promotion of their conservative, monarchist and Orthodox worldviews and a threat to others determined to preserve the autonomy of art and its ability to shock. One of the apparent targets of this open letter was the head of the Perspectives Jury Marina Razbezhkina who has headed the School of Documentary Film and Documentary Theatre for the past seven years and founded alongside Mikhail Ugarov. Her most outstanding film Время жатвы (Harvest Time) won the prestigious FIPRESCI prize in 2004 at the Moscow festival and went on to win other international awards. Other minor mishaps with a clumsy Minister of Culture and spectacularly uninformed  master of ceremonies at the closing of the festival were to somewhat mar the moment of awarding Catherine Deneuve the Stanislavski Award.

While the actual competition programmes this year were never going to bear any comparison with major festivals - Ferzan Ozpetek and Istvan Szabo were the only two major internationally recognised filmmakers to enter their films into the competition- the saving grace of Moscow's film festival is, perhaps, the extreme eclecticism of what it offers as a whole. Its saving grace but for someone who doesn't plan well in advance carefully studying what is on offer its greatest frustration. While other major festivals may concentrate on contemporary offerings Moscow has a whole host of retrospectives which can only delight the more historically-minded film buff. This year there were major retrospectives of Ernst Lubitsch, German cinema as well as of films by the Brazilian President of the Jury, Hector Babenco. Another retrospective covered the films of Yonfan. Besides this there was a wide offering of documentary films, and other eclectic categories such as a programme of films on sex, food,culture and death as well as another entitled 'Good,Bad,Evil', there was also a small programme of Latin American films including the almanac film on Havana called 'Seven Days in Havana' and other programmes including the 81/2 films programme which included offerings by Ken Loach, Leos Carax, Wes Anderson and Matthew Akers' film on Marina Abramovic. The Gala premiere's included Barnaby Southcombe's film I,Anna starring his mother Charlotte Rampling as well as a new film by Vitaly Melnikov starring Oleg Tabakov, Kirill Pirogov and Oksana Mysina focusing on Chekhov's relationship with Lydia Avilova. Other programmes included a small selection of Soviet 3D films shot with Stereoscope from the 1940s, a programme of Estonian animated films as well as a major Cine Fantom presence of three programmes - one of them dedicated to a retrospective of  Igor Aleinikov films. Another fascinating programme named Moving Pictures was dedicated to films about artists- it included Shengelaya's 'Pirosmani', Tarkovsky's 'Andrei Rublyev', Konrad Wolf's film about Goya. A programme retrospective of Universal Pictures movies included Karel Reisz's messy but far too underrated Isadora.

As far as the various Russian films in the festival go I will leave a more detailed comment to a future post. The major competition entrances were Litvinova's original fairytale 'Rita's Last Tale', Andrei Proshkin's  'The 'Horde' and Evgeny Pashkevich's 'Gulf Stream Under the Iceberg'. Proshkin won the major director prize and Litvinova the Kommersant award and even though it attracted by far the greatest public interest failed to win the prize for viewers sympathy. However, its originality suggests that it merits much more attention and may outlive the reputation of the technically superlative film by Proshkin penned by one of Russia's greatest contemporary scriptwriters Yuri Arabov. However, I'll come back to the Russian films of the Festival in a follow up blog soon. The major award to Junkheads surely won't go without some astounded comments in the Russian press. Sollimi's more solid film A.C.A.B perhaps justly won the historically more accurated FIPRESCI award (along with a number of other awards) and it is, perhaps, of some surprise that Szabo failed to pick up any of the awards with his film 'The Door' if not at least for the oustanding performance by Helen Mirren. Although his The Door can not be said to represent the height of Szabo's work. The showing of the half-documentary Diaz based on events in Genova in July 2001 was, for me, one of the more significant films and the strange and shocked eerie silence that greeted the film at the end of the showing was one of the reminders of the uncomfortable context of the world outside within which this film festival has taken place.