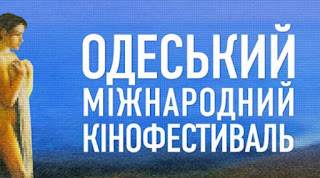 The Third Odessa International Film Festival is just about to close and no doubt the organisers will be drawing their conclusions as to the successes and failures of this years festival. In terms of viewers it seems to have been a success and the festival seems to be developing year on year. In terms of visibility it also has many reasons to be proud of itself - the arrival of Geraldine Chaplin and Claudia Cardinale and the excellent way it has used the Potyemkin Steps for a mass screening every year has meant that it has known how to exploit one of the most iconic scenes in cinema to the full. This year Russian critic noted a moment during the screening of Chaplin's City Lights which desrves iconic status itself. Among the massive crowd of 20,000 a woman with a pram was desparately trying to find a space in which she too could watch the film screening- what more iconic image could one find, it seems. to deny the central thesis of Peter Greenaway that cinema is dead. Greenaway's press conference and master class here in Odessa seemed a lesson in provocation to those thousands who massed to the Potemkin Steps screening and to all those who attended the tens of film at the festival. However, provocative and, at times, arrogant his words seemed to be, he nonetheless contributed a fascinating point of view as to where visual culture may go in the 21st century - and, although his concepts of multimedia and interactivity often seemed sketchy his denunciation of present-day cinema (and films as such) as merely illustrated text had at times a ring of truth to it. Yet Ukraine as the country of Dovzhenko and the country where Paradjanov spent a significant part of his life could, perhaps, offer something to break through this prism of literary culture imposing its own prism on visual culture.

Given that there are over 5,000 film festivals in Europe alone, the question arose again and again as to what the purpose of the Odessa Film Festival was. After Moscow one notes the smaller size of Odessa as both a threat and an opportunity. Moscow seems to be stuck in an eclectic inertia: so many minor programmes with a competition programme leaving much to be desired. Moscow may be an A-category festival because it doesn't quite feel like it when the competition films are considered. Odessa at least had the opportunity to include Loznitsa's brilliant В Тумане (In the Fog) which will surely find its place in cinematic history. Other films varied in their quality but at least it could still include films by Spanish director Alex de la Iglesia and Switzerland's Peter Luisi. It also had an excellent festival of festivals programme including Haneke's Love, Taviani's Caesar Must Die, Milos's Clip from Serbia and the revelationary Beasts of the Southern Wild by Benh Zeitlin.

Odessa also attempted to showcase Ukrainian cinema with a notable selection of films including shorts as well as feature length films. Its retrospective of the lost world of 1990s Ukrainian cinema showing five films of varied quality. Gala premieres of Wes Anderson, Woody Allen and Todd Solondz (who was the subject of another retrospective) and very strong opening and closing films by Matteo Garrone and Ken Loach added something to the festival. The programme of Russian films was a very small one this year but then the mere fact that it included Vasily Sigarev's Жить (Living) gave it some real weight. The other film of real quality was Голфьстрим под Айсбергом (the Golfstream under the Iceberg) - a film ten years in the making but of exceptional aesthetic quality - directed by the Russian- Latvian director Evgeny Pashkevich. If the programme as a whole seems rather thin compared to Moscow's festival, the addition of Master Classes (something that used to take place at the Museum of Cinema in Moscow but has since been rather absent in the Moscow Festival)  by Greenaway, Solondz, Heino Deckert, Geraldine Chaplin, Sergei Loznitsa and others seems to have an educational aspect to the festival which Moscow simply doesn't have. The fact that it is also a far more democratic festival than Moscow (the Moscow ticket prices are wildly exhorbitant) suggests that it does have some real link to the city in which it takes place. Yesterday's showing of Dovzhenko's Земля (Earth) with an Ukrainian ethno-folk group shows that in spite of the technical hitches with the film (and the fact that a newly restored copy was promised but the 1971 restoration was actually shown) the festival is still able to offer real quality spectacle to the whole city. While talk of Odessa as the Cannes of Eastern Europe is absurdly exaggerated there is nonetheless little room for doubt that Odessa's Film Festival has attempted to carve out a unique space (however small) for itself in the constellation of East European film festivals.
Posted by giuvivrussianfilm at 22:49