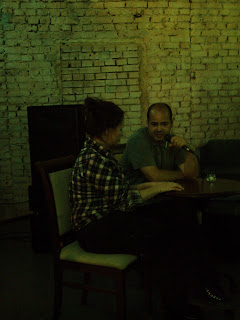 The discussion of Svetlana Baskova's new film 'For Marx' at Fitil's cinema in Moscow, mid June 2012. 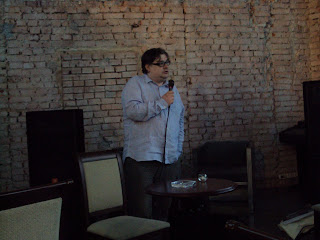 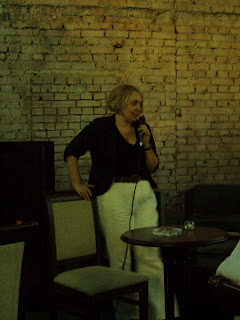 Just before the Moscow International Film Festival began, Fitil cinema in Moscow decided to show Svetlana Baskova's film За Маркса (For Marx) - a film which provoked some discussion at the Kinotavr Film Festival in Sochi in early June and which represents a new departure for the director who was famed for her Extreme Underground works like Зеленый Слоник (The Green Elephant) and Кокки – бегущий доктор (Kokki- the Running Doctor). Well, not an entirely new departure as her documentary on provincial independent trade unionist activists Одно решение — сопротивление (One solution - Resistance) was an initial treatment of the subject which Baskova explores in her new film. The transformation of Baskova's style of film-making will have to be left to later blogs (as I'm still yet to watch her films made in the Noughties) but her latest film certainly (along with the documentary) certainly fills one with a certain amount of optimism about a new voice in Russian cinema who has dug out a new niche. Baskova has dynamited through a road in Russian film which has been hidden for decades. If the working class hasn't got to heaven yet (and the film suggests that it's still in purgatory in so far as its attempt to liberate itself from the contemporary inferno that is contemporary provincial Russia) Baskova has finally given voice to a theme that was entirely absent in post Soviet cinema with the debateable exception of Abdrashitov's Магнитные Бури (Magnetic Storms). One could even argue that the theme wasn't that popular in late Soviet times - Ryazanov's favoured comedies  of the 1970s and 1980s feature office workers and administrative personnel (and the 'social relations of production' could be said to be as absent a theme in late Soviet cinema as it was elsewhere). One would have to go back to Sergei Mikaelian's 1974 film Пре́мия (Bonus) based on a play by Aleksandr Gelman and starring Evgeniy Leonov to find some kind of Soviet antecedent.

What was particularly interesting for me about the film was what many inattentive critics will criticise (and have it seems criticised) most harshly. It is a film about the imperfection of resistance but resistance nonetheless. The scenes where the trade union activists discuss Godard, Gogol, Belinsky's Salzburg letter and set up a film club at work showing Godard's Vent d'Est is only partially Brechtian. Yes, these allusions carry definite references to what the film is about but I'd agree with the producer Osmolovsky that these don't contradict reality. In fact the day after the showing of the film I realised how right the film got these scenes. In terms of personal recollections I'd never had a good discussion whenever I'd worked in an office environment or as an English teacher with colleagues but the more proletarian my work was (fruit picker, post office sorter or factory worker) the more intellectual my discussions would be. While working night shifts packing food for airport flights with horrendous pay and conditions, conversations with my fellow worker (a Pole involved in Solidarnosc and who left Poland to come to Germany and the UK) would be about little else than Czeslaw Milosz and contemporary Polish literature, post office work in Brighton would involve long discussions about Daniil Kharms and picking apples in France and Italy would dissolve into long discussions about Yugoslav literature and Dino Buzzati's novel Un Amore. Something inconceivable in an office job.

This is, arguably, one of the ways in which the film has dynamited a new path through Russian cinema. For two decades there have been a number of myths holding back certain themes and certain ways of looking at class (or looking at class at all). Take, for example, the appalling film Мусорщик (The Garbage Collector) by Georgi Shengelia in 2001. It is not just the faux glamour ideology that has warped Russian cinema but a systematic distortion of the vision of reality. Whether Baskova's  film can signify something of a birth of a nouvelle vague (more Godardian in spirit than a la Truffaut) remains to be seen. However, it seems that this film is a start - what one critic is said to have called 'The Left Year Zero' - an attempt to forge a political and Brechtian cinema which doesn't fall into agitational myths (in fact dutring the discussion after the film at Fitil socialist activist Ilya Budraitskis was the most critical voice to be heard about the film precisely for the films absence of directive didacticism).

One question remains about the final scene- Anatoly Osmolovsky was said to have wished for the scene to be shot mute in black and white to signify the return to pre-Soviet industrial conditions. For me this may indeed have been a stronger finale than the film actually had and would probably have been the right decision. Another fact that came out in the discussion is the fact that many of the more 'mystical' parts of the film (and the most difficult and costly scenes to shoot) were excised from the film and this may have much to do with the transformation of Baskova's style of filmmaking.