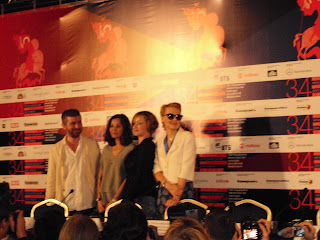 Renata Litvinova with her group of actors at the press conference for Rita's Last Tale.

The main programmes of the Moscow Film Festival this year were marked, in general, by a relative dearth of Russian and former Soviet republic films. It is true that one or two programmes were completely devoted to this: the Cine Fantom three programmes in one meant that alternative Russian cinema was a major presence and another small programme devoted to Estonian animation should also be mentioned but, apart from the large selection of films curated by Irina Pavlova shown at Dom Kino, the festival proper which took place at the Oktyabr cinema was rather lacking in a truly significant presence of films from the area of the former Soviet Union. One of the great absences this year was Evgenii Margolit's excellently curated series on the Socialist Avant-Garde- for four years running one of Russia's greatest film scholars chose a series of films from the Soviet Union and other Soviet-bloc countries to demonstrate that the imposition of the doctrine of 'Socialist Realism' didn't quite manage to strangle all aesthtetic experiments and that throughout the Soviet period there was a wide experimentation in style and aesthetic that has still gone unreported and even unstudied. The difficulties of classifying and untangling considerations of the political and the aesthetic in pinpointing these films was explored in an article by Julie Draskoczy in KinoKultura last year www.kinokultura.com/2011/34-draskoczy.shtml but the absence of this programme from the Moscow film festival (however understandable this may be given that four editions had already been shown) was the first great disappointment. The retrospectives this year were nearly all to be devoted to foreign cinemas and directors (German cinema, Lubitsch, Babenco, and Universal Pictures as well as to mainly foreign made biopics about famous artists) and the chance to showcase more from the history of Soviet cinema was neglected. With the closure of Musei Kino in 2005 public showings of Soviet films seem to be relegated to the rather safe and conservative as well as repetitive programme of Ilusion cinema.

There were three Russian-language films in the main competition (along with the opening film of the festival Dukhless- which was shown out of competition) whereas the Perspective competition films had a spattering of Armenian and Georgian films alongside Alexei Fedorchenko's contribution to an almanac film entitled Fourth Dimension. The Russian Trace programme seeks to choose films that have as subject matter some Russian theme (or that have some connection to Russia) but are not Russian made. The documentary competition included Andrei Gryazev's film on the Voina art group which was made on a shoestring budget of $2,000 but was quite a revelation. A curious addition was the screening of a number of Soviet and Post-Soviet 3D films made with the use of Stereoscope. The curator in his short introduction noted how in the Soviet Union 3D was never a fashion and never enjoyed boom periods like in the US but has a rather long and steady production history. For me the highlight of this programme were the films made in the early 1950s on Gorky Park and another based on short stories by Chekhov (Налим - Burbot) the latter directed by Aleksei Zolotnitskiy in 1954. The large Cine Fantom programme included a retrospective of Igor Aleinikov including the now near-classic Трактористы 2 which was scripted by Renata Litvinova. The main event of its 'Alternative' programme of contemporary films was the film by Oleg Khaibullin and scripted by writer Yuri Mamleev Мечта Олигарха (The Dream of an Oligarch) based on Mamleev's book Wandering Time starring a whole field of Russian counter-cultural artists and writers including Gleb Aleinikov, Mamleev himself, and German Vinogradov. More of a perforamnce than a film (or arguably a performance film the film irritated and inspired in somewhat equal measure. Shown twice it gathered at the first performance (at least) a full hall.

As far as the main feature and documentary films went they won a certain amount of attention. The Renata Litvinova film «Последняя сказка Риты» (Rita's Last Tale) managed to grab the largest public and also critical attention. Winning nothing but the minor Kommersant award this enigmatic film still has me wanting to watch it a second time rather than give a more immediate detailed opinion of it. Litvinova is certainly one of the most unique figures in contrmporary Russian culture today - as actress, scriptwriter, director and star who has moved from alternative cultural circles into the mainstream while not entirely losing her alternative status. Yet as Sergei Loban has stated in an interview (and Loban shares something of Litvinova's position in Russia's cultural constellation after the rather spectacular success of his two low budget, alternative but widely acclaimed films «Пыль» (Dust, 2005) and «Шапито́-шо́у» (Shapiteau Show, 2011)) Litvinova's film was simply not understood by the foreign members of the Jury. Litvinova herself in her press conference noted her inability to be received abroad when she notedwhat a contrast her reception in Moscow was to a showing of her film at an Italian film festival where not a single viewer turned up to watch her film. Litvinova's fairy tale like exploration of death most definitely has been strongly influenced by her work with Kira Muratova and shown in the perspective of this influence her film still seems rather lacking and secondary. It doesn't pack as powerful a punch as Muratova's Мелодия для шарманки (Melody for a Barrel Organ, 2009) but then, to be fair, it couldn't be expected to. Litvinova has, moreover, not chosen Muratova's anti-skazka and relied on a more positive and optimistic ending. Death may be the common denominator but Litvinova still finds consolation whereas Muratova doesn't. Nevertheless, in spite of Litvinova's troubles in finding suitable cameramen and in spite of all the troubles in finding funding (it was wholly self-financed until the final stages) she seems to have shot one of the more original films of the competition and watching the film gave an immense aesthetic joy whatever the other shortcomings of the film. If in a few decades time Margolit's successor comes to look back on the "Orthodox Avant-Garde" (if Orthodox totalitarianism is where Russia is headed) he or she will surely choose this film in the retrospective as a sign that not all films succumbed to the deadening hand of Orthodox Realism (proclaimed as state doctrine of the arts in the 2014Congress of Orthodox Cultural Warriors presided over by Nikita Mikhalkov and Elena Yampolskaya under the watchful of Culture Minister Mendinsky).

The other major Russian offering for the Moscow Film Festival was Aleksei Proshkin's Орда (The Horde). Produced by Orthodox Encyclopedia one may have thought that this film would have the Orthodox critics in ecstasy. This was apparently not the case. During the press conference up popped the usual suspects to denounce this film as spreading naturalism and Orthophobia and blasphemy. It has also been attacked for the very opposite as being a state-financed propaganda film demonstrating the supremacy of Orthodoxy over other religions. Suffice it to say that it had a powerful team and a film scripted by Yuri Arabov rarely turns out to be one that Russian film buffs can completely ignore. It was technically very well made but didn't succumb to faux Hollywood imitations. The acting was accomplished especially the roles played by Maksim Sukhanov and Rosa Khairullina (she went on to win the best actress prize for the film and Proshkin won the best director prize of the festival). The film itself was, at least in the intentions of scriptwriter and director, not really about Orthodoxy per se (and this is what most of the more partisan views missed) but more about contemporary concerns. Nonetheless, whether it really distanced itself from those films of recent years - such as Lungin's Царь (Tsar) and Остров (The Island) and Khotinenko's Поп (Priest) etc- in becoming part of an overwhelming trend of well-made but ultimately ideologically correct films - is debateable. Opposing but interesting views of this film regarding this question have been given by Yuri Gladilshikov in the Russian Journal http://www.russ.ru/Mirovaya-povestka/Hozhdenie-mitropolita-po-mukam and Aleksei Gusev in Seance http://seance.ru/blog/mmkf-diary-christ-rules/ . Gusev's view seems to me the more convincing.

The other Russian film of note was Andrei Gryazev's film on the Voina art group Завтра (Tomorrow) entered in the Documentary competition. Almost impossible to watch in Russia for its filmic merits alone and already shown at the Berlin Film Festival gaining a great deal of interest there, its press screening was greeted by strong applause and whistles. It was hard to separate the aesthetic and political or ideological merits of the film and yet it was definitely a fascinating portrait from the inside of an art group which has made history and so its documentary value in years to come will remain. The central protagonist of the film seems to be the son, Kasper, of the two major art activists- and this seems the reason for the title of the film. The intention of the two activists to rear their child in freedom (whatever the realities of external reality) appears to be the central ideological motif of the film. He showed the group at everyday moments as well as during two of their more famous actions (overturning the police car and during the painting of the phallus on St Petersburg's famous drawbridge) as well as at other more intimate moments (he is said to spent two years with the group). This is a stunning film for the fact that it was filmed almost without money (it is said to have cost about $2,000 to film which mainly went on the directors train tickets between St Petersburg and Moscow) and for the fact that the director avoided all the traps that a film like this could have fallen into - it was certainly no mouthpiece for the group even though they had given the filmmaker near absolute freedom to shoot what he liked.

Other films at the Festival which I missed but hope to catch up at the Odess Film Festival starting in just over a weeks time including Sigarev's Жить (Living) which has earned very different views but for some is said to be the best film of the last decade (an opinion held by Daria Tasbulatova in her interview with Irina Pavlova for Chastny Korrespondent http://www.chaskor.ru/article/kurator_rossijskih_kinoprogramm_irina_pavlova_menya_ne_tak_legko_ogoroshit_28645 . A great shame that the film has been released in so few copies although latest reports have suggested that there may have been some interest in its international distribution. Another film of interest which is also to be shown at Odessa's Film Festival is Evgeny Pashkevitch's Latvian Russian-language film «Гольфстрим под айсбергом» (Gulf Stream Under the Iceberg).

Finally the Perespectives Competition had some offerings from Armenia and Georgia. Failing to go to Natalia Belyauskene's 'If Only Everyone' but hearing a few positive remarks about the film, a cursory look at Oganesyan's 'Ana-Bana' convinced me that Georgian cinema while yearning for the heyday of the 1970s comedy has fallen into nostalgic imitation. On the other hand, one of my main regrets of the festival was having to leave Georgy Paradjanov's Все Ушли (Everybody's Gone) which at least during the first fourty minutes of the film proved an ability to rediscover anew some of the magic of Georgian without falling into the traps that Oganesyan had.
Posted by giuvivrussianfilm at 03:30